Mike Cosgrove must like Darrell Dexter's hesitation on Bridge Terminal

The teacher opposes placing the terminal on Dartmouth Common, in any orientation 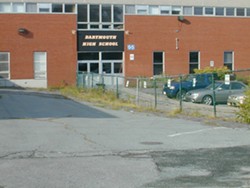 Mike Cosgrove, a teacher at Dartmouth High School, has been one of the most vocal critics of placing the Bridge Terminal on the Dartmouth Common---in any orientation.

With the premier suddenly raising concerns about the terminal, Cosgrove sends the following email, which I'm posting here with his permission:

As you know, I've been following the bus terminal issue, and you have been doing a good job reporting it, as you generally do.

One thing that you may not fully realize is that no public consultation was held to reorientate the terminal. You will not find evidence of that claim anywhere.

The Sperry architect told me himself that he called Metro Transit to get them to reorietate the terminal because it made more engineering sense. [Editor's note: Troy Scott of Sperry disputes this assertion-- see below.]

At every public hearing the unanimous voice was against locating the terminal on the Common at all.

In fact one could make the claim that the new location is actually closer to the school if you average out the distance of all the bus bays combined. It definitely displaces more green space than the original plan.

The notion that the public was responsible for reorientating the terminal just isn't true, so you may not want to report this claim of Metro transit's unless you can substantiate it.

The terminal location and orientation came out of the CBCL Consultants process not ours (Sperry's). When the project was first released as a Design Build project and before Sperry was involved in the project I call Strategic Transportation at HRM (again not Metro Transit), to discuss the orientation of the Terminal as a concerned citizen and local resident myself, not the Project Architect. Once the Design Build option was cancelled, Sperry & Partners was selected to design the building, and again the orientation was decided out of the Commons Master Planning Process, a project being executed by CBCL. Michael is miss quoting me.