There are some great imported beers available in town. Who has the widest selection of beer? 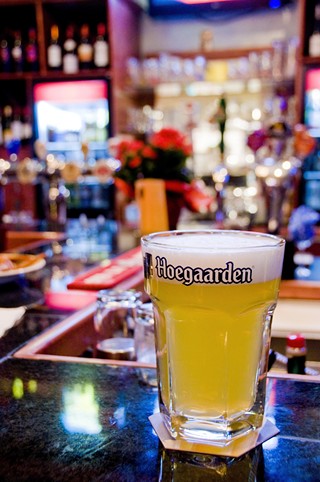 "Last year, during the Latvian Festival," Dave Page, bar manager of the Economy Shoe Shop, told me, "we brought in Zelta, and we pretty much had to buy a pallet in two shipments." One pallet of beer holds 72 two-fours. He just sold off his second shipment of Zelta last week.

Importing beer is a risky business. If a bar can't sell it fast enough, they get stuck with the bill. Most bars in Halifax, Page says, probably have some old flavour of the week beer gathering dust.

If you order off the existing NLSC list or buy the imported draught from Molson and Labatt's, buying and selling imported beer gets easier and less risky. Of course, then you get what everyone else gets. In general, in Halifax, most bars choose one brewery's line of beers or another.

The Elephant & Castle (5171 George), for instance, is a Labatt's bar with local Propeller and Garrison thrown in. In terms of selection, they offer the entire line---Smithwicks, Bass, Boddingtons and all the Belgians. It's a solid selection for an English pub, typical even, given that most pubs in England are dominated by one brewery chain or another. Grouse about it if you'd like, but the E & C is exactly like any big pub you'd find in Halifax, England. And you can watch English footie, too.

Brussels Brasserie (1873 Granville) is an upscale brasserie that shines in the bottled department. They've acquired a respectable variety of Belgian Abbey ales and one Trappist Ale, Chimay, in bottles. They're pricey, (Chimay is $21.95), but top drawer. Brussels also has one of the better lists of English red ales (Fullers, Black Sheep, Brakspear Organic and more). Leffe, Hoegaarden and Stella are on tap along with the wheaty Rickard's White. Plus, the chef told me that, in true Belgian style, the Belgian beers form the bedrock of the brasserie's food menu.

The bars with the biggest selections mix and match. Maxwell's Plum (1600 Grafton) is the best place in town to chase a diverse range of beers with 60 different beers on tap and over 50 types of bottled beer. Their 80oz brewtenders are fun; they look like blenders with a spigot, and fill up on Heineken or Coors with regular specials under $19.

The Economy Shoe Shop (1663 Argyle) hive of bars has 24 taps. Both Maxwell's and the Shoe Shop carry all the Halifax microbrews on draught and several great Pumphouse ales from Moncton. The Shoe Shop was the first place to bring in Belgian beers. Apparently there's a tradition that patrons like to steal the heads off the Belgian taps. "Those metal discs with the decals were disappearing all the time," says Shelly MacPhail, operations manager with the Shoe Shop. While they locked the taps down, the beer still moves quickly.

O'Carroll's (1860 Upper Water) has 22 varieties on tap, compared to the Old Triangle's (5136 Prince) respectable 16. O'Carroll's covers all the locals including Moncton's Pumphouse, with a Guinness and Kilkenny for the Irish in ya.