Moneyball hits for the cycle

Brad Pitt drama is smart and involving, set in baseball's back office 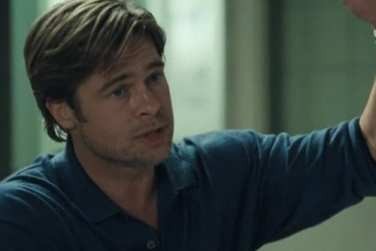 Moneyball is an inside-baseball movie about the inside of baseball---there is precious little sports footage; it’s about team-building from statistical and budgetary perspectives, which is a hard sell. Luckily it’s got a terrific Brad Pitt at the centre. Pitt is Billy Beane, the spirited general manager of the worst team in baseball in 2001, the Oakland Athletics. He hires a player analyst (Jonah Hill) who convinces him that losing three huge players for the season is actually a blessing---he’s figured out an equation that projects the best players---the best deals---in the sport, and how the Yankees’ $114 million payroll means nothing in the grand scheme. Beane faces resistance from his staff, including Phillip Seymour Hoffman and Robin Wright extended cameos. It’s mostly the Pitt show, as director Bennett Miller (Capote) has built the movie Clooney-style around him, a worthy decision. (Please note the irony of a film about budget hires being written by Aaron Sorkin and Steven Zallian, a pair of million-dollar screenwriters.) It’s way greater than a movie about baseball with hardly any baseball in it should be.