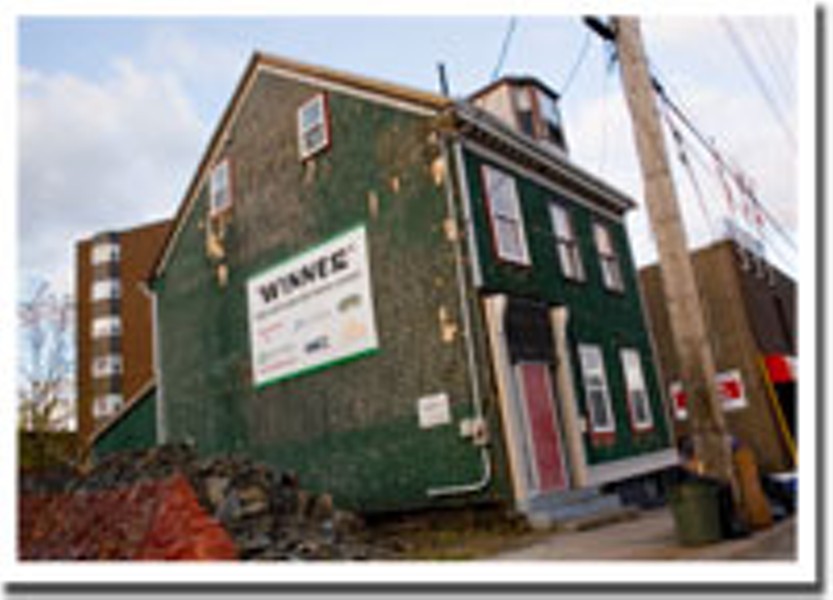 A Cogswell Street home is famous for being homely, but some neighbours aren’t thrilled with the new-found attention. Lis van Berkel gets the ugly truth.

Robin Stewart thinks his house is ugly—and on its west wall, a billboard-sized sign has been declaring it so since September. Vandals didn’t tack it there. Neither did HRM’s Dangerous and Unsightly Bylaw- enforcement officer. No, this sign, emblazoned with corporate logos, was strung by the Nova Scotia Home Builders’ Association.

The NSHBA represents professional builders, renovators and developers in the residential construction industry. And the sign is part of a $15,000 prize package that the north end homeowner won when he entered the association’s Ugly Home Contest in March. The prize includes materials like blown-in insulation, roofing shingles and vinyl windows and doors, all of which Stewart is currently using to make his house more energy efficient—and, he says, more attractive.

“I do think it was ugly from my aesthetic point of view,” says Stewart of his three-storey Victorian house, which faces Citadel Hill. “There’s not much unity in the renos that had gone on. It’s painted grey and green and red, and kind of a ’70s tuxedo-blue.”

But structurally it’s not an ugly house, not even to Stewart: “I think it has beautiful bones—the ‘dental work’ at the top, the detailed scrolls—they didn’t destroy that when they did the renovations for the house. I’m working to accentuate those parts.”

Near the corner of Cogswell and Creighton Street, Stewart’s house is one of a row which forms a graceful kind of promenade that has, since the 1970s, ushered thousands of cars per day into downtown Halifax over the nefarious Cogswell Interchange—itself the pinnacle of ugly, according to many north end residents. It is an ideal location for a marketing billboard—particularly since a 2003 fire destroyed the houses next to Stewart’s.

“It’s fun,” says the NSHBA’s Sherry Grant of the contest and the similar Ugly Deck and Ugly Kitchen competitions, explaining that anyone who attends the association’s annual home show can enter by pinning up a snapshot of their house. “The product sponsors narrow it down and they look overall and ask, ‘How inefficient is it? How ugly is it?’”

But sustainability and beauty are like apples and oranges: wouldn’t a more appropriate title for an NSHBA promotion for insulating products actually be the Most Energy Inefficient Home? Not very catchy, and the competition would be fierce in a city full of nineteenth-century houses with walls insulated with newspaper, seaweed or rags—or nothing at all. An association dedicated to good building would do well to educate the public about that.

Hal Forbes of Forbes Restoration and Design was taken aback when the sign first appeared on what he calls a “very stately” house. He has restored other houses on Cogswell Street and elsewhere in the north end using wood-frame windows, doors and shingles.

“The whole thing is kind of crass,” says Forbes. “Contests like this should have gone the way of beauty contests—we don’t have them anymore either. They’re promotion at the expense of someone, and I’d rather see something a little more positive.”

Forbes also says labelling a house “ugly” in exchange for only $15,000 isn’t worth the embarrassment—especially because it can’t be used to buy restoration materials like the ones he uses to renovate buildings: “Frankly, I never knew plastic windows and vinyl siding were so affordable, because I never buy them.”

But another neighbour envies Stewart’s chutzpah: “I’m so poor from renovating houses,” says Dean Robinson, who’s renovating his fourth house in Stewart’s neighbourhood. “I had an ugly house on Maynard Street. My house was probably uglier than that. Good for him!”

Stewart, who also owns rental properties in the north end, says he’s “kind of saved the house” from developers who were likely eyeing the property. In addition to the empty lot—where the footing for one new house was poured earlier this month—the surrounding properties include the former legion building, which now houses a radio station.

Stewart wouldn’t say how much the total renovation will cost him—the NSHBA isn’t picking up the tab for labour—but he likes the stir the sign’s created: “Definitely people on the street who have stopped have been very encouraging.”