The Spryfield Community Association is offering free films on a farm all summer long. 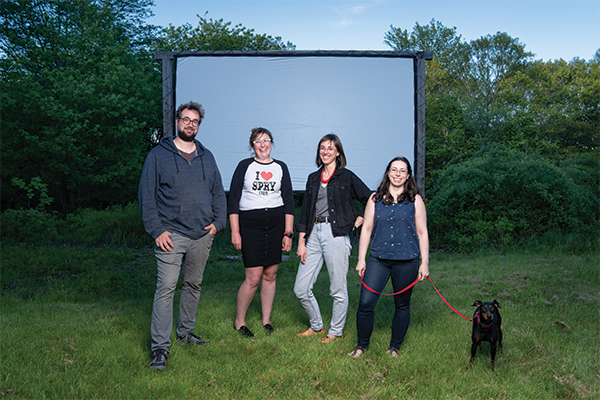 Spryfield will get a free outdoor movie festival this summer thanks to the Spryfield Community Association, which has erected a theatre on the Spryfield Urban Farm on Rockingstone Road.

"The idea for the theatre came from just hanging out at the farm and thinking 'This would be a great place to watch movies,'" says Veronica Post, chair of the association's Fun Committee.

The organization showed a few movies in the community last year, including Alien and a very popular screening of Frozen, and decided to build a more permanent site this year on the farm's natural amphitheatre.

"It's a timber frame structure, made out of pieces of six-by-six hemlock we sunk into the ground," says Post of the screen. "It's set up at the base of this slope, and then the forest surrounds it." Lawn chairs and by-donation snacks will be provided; you can also bring a blanket and your own treats.

Each weekend of the Moonrise Movies series offers a theme: Summer Chills (Night of the Living Dead, July 12 and Let the Right One In, July 13); Summer Solstice (Six Primose, July 19 and The Endless Summer, July 21); the family screening Labyrinth (August 17); Robots (Terminator 2, September 6 and Metropolis, September 7) and an all-ages finale (Hunt for the Wilderpeople, September 20 and Sparrows and Amazons, September 21). Screenings begin after sunset. (More info at myspryfield.org.)

"I did most of the work on the program myself, and I was a little bit of dictator about it," says Post, laughing. "We were getting so many different random movie suggestions and it didn't feel like people were as passionate about it as I was. So I said, 'No we're just gonna show good movies, and I'm gonna pick them.'"

Considering that the farm is privately owned—"It's not a city park"—the future could see booze on site, and "in the long run I'd like to partner with local filmmakers—to screen their own work, or curate a weekend of films," says Post, who adds AFCOOP has been a guiding funding force in the project, which also received money from the city. "This is something I want to do more of, partner with more groups who are into movies."

Part of the Spryfield Community Association's mandate is to offer free events to residents, and Post feels Moonrise Movies is a positive step in fulfilling that mandate. "First and foremost we want Spryfieldians to enjoy it," she says. "There's also the added benefit of getting people out to the farm."