The university's collection of lesbian pulp fiction (one of the largest in North America) turns 20. 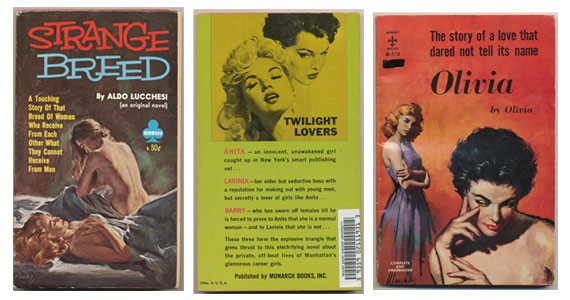 Two women lock eyes across a crowded room. Soon, one approaches the other and lightly touches her shoulder…

Sounds like a scene from a bad movie, or, at the very least, not something you’d expect to find behind glass in a library. Not according to Mount Saint Vincent University (MSVU) librarian Meg Raven. As she explains by phone, this sort of scene is a typical beginning to a lesbian pulp fiction novel—a genre that flourished in the 1950s and ‘60s

Raven and fellow MSVU librarians have been working to preserve the collection for the past 20 years. This Wednesday at noon, Raven and her colleagues gave a virtual tour of the MSVU collection at the Central Library for Halifax Pride week.

“University libraries are a place we should be able to go to find different opinions, a representative sampling of different works that may be uncomfortable to some people,” Raven explains. She says this collection is the second biggest in Canada, and one of only a handful in North America. She adds it has become an important record of the ideas and conventions swirling around lesbianism during the pulp fiction heyday, allowing a new understanding of what it was like to be alive (and like girls!) during that time.

“People thought of it as holiday beach reading,” Raven explains, saying the genre’s cheap, pulpy paper and sometimes-generic plot lines gave these books a disposable feeling. But, the genre’s affordability made these works find their way into the lives of many lesbian readers, meaning they were actually quite impactful.

That explains why Raven and her colleagues have continued preserving lesbian pulp fiction since stumbling upon some forgotten books in a now-closed shop in 1996. Raven says they originally started the collection as part of the university’s mission to “collect works that relate to women…” And while these titles are on offer at MSVU—for supervised, in-library enjoyment—the books’ delicate nature means they aren’t able to reach as many hands as Raven wishes they could.

As a solution, Raven and her fellow librarian Denyse Rodrigues, along with professor Professor Rhoda Zuk, have begun offering occasional public lectures, including the one that happened on Wednesday. Marking the 20th anniversary since the collection began, these lectures offer an overview of the genre and selected readings of particular importance.

It’s also a chance to erase misconceptions, like the assumption these novels are risqué.

As Raven puts it, “They were female relationships that aren’t so much sexual as they are intimate and personal. Authors were under a lot of pressures from publishers. A lot of the stories did not have happy endings. ‘Don’t go down that path’—that would have been the lesson they were trying to impose.”

While some books were more “voyeuristic” and written by men, Raven says the works that carry the most importance were written by lesbians. “The lesbian authors have said that a lot of the writing they were doing was for other lesbians, that there was no place for them to go to find out information and that they were anxious to share their own experiences,” she says.

“There would have been an underground sharing network, a subculture of these books being passed around,” Raven says. “It’s important to understand where we’ve come from and, honestly, how far we’ve come. It’s not that long ago we wouldn’t have been able to do a talk like this...that we’ve been invited to do this is pretty cool.”