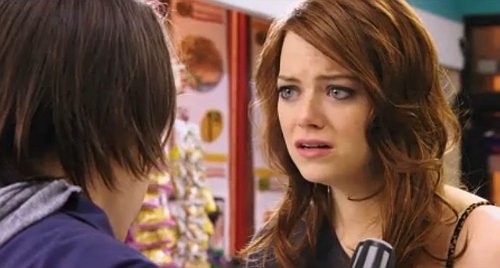 Don't be sad Emma, you've always got Easy A

Movie 43 is a series of short segments, all connected under the guise of a gross-out comedy. Ultimately, it’s really just a lousy movie. Its ensemble cast, including Halle Berry, Kate Winslet, Hugh Jackman and Naomi Watts, to name only a few, makes it seem more promising than it is. The one exception is Veronica, a short in which a grocery store cashier, Neal (Kieran Culkin) and Veronica (Emma Stone) engage in a raunchy conversation accidentally overheard on the PA system—the simplicity of the scenario along with dialogue delivered in perfect deadpan results in some genuine humour, in contrast to most of the other ludicrously overblown skits that can’t even be saved by good acting. But a few funny moments don’t even come close to saving this movie.

Movie 43 is not showing in any theaters in the area.