Film review: Burn this mother! down

Not since Scream 2 has a movie's top-secret plot been so disappointing. 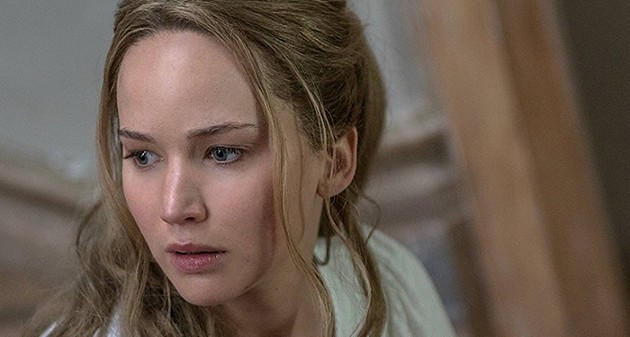 he best reason to see mother! is Michelle Pfeiffer, one of our finest and least working actors, as she snarls and simmers and makes Jennifer Lawrence feel bad. There is no other reason to see mother!, Darren Aronofsky's latest. Not since Scream 2 has a movie with a top-secret plot made you feel so dumb for ever caring.

Lawrence is married to Javier Bardem, a poet. She has rebuilt his burned-out house by hand, a Pinterest board come to life. (How do they afford all this antiquing? This movie does not take place in real life.) Ed Harris shows up and asks if he can stay. Then his wife (Pfeiffer the great) joins. Then their adult sons. Bardem keeps letting everyone in, cause they love his work. Lawrence—no character has a name—meekly protests, while discovering basement vaults and watching lightbulbs explode and spray blood everywhere.

What happens next is very googleable, has caused walkouts all over North America and is even worse than you can guess. tweet this

Pfeiffer hints that a child would change everything in this creepy-ass horror show. And boy, does it! Lawrence gives birth in the middle of a mob, and what happens next is very googleable, has caused walkouts all over North America and is even worse than you can guess.

Aronofsky, also Lawrence's boyfriend—and you don't always need to know that stuff but it feels really notable here—started this Biblical/environmental allegory train moving with the much more explicit Noah. In mother! his pretensions—admirably tamped-down in The Wrestler, off-puttingly unleashed in Black Swan—are a firehose of second-hand philosophy, creation myths (artistic/religious) and jaw-dropping arrogance exploding like so much blood from a lightbulb, staining common sense, tone and actors that deserve much better. It's interestingly bad, and that is not good enough.