Film review: On the Basis of Sex

A classic Hollywood treatment of the case that made Ruth Bader Ginsburg’s career, the drama also marks the return of Mimi Leder to the A-list. 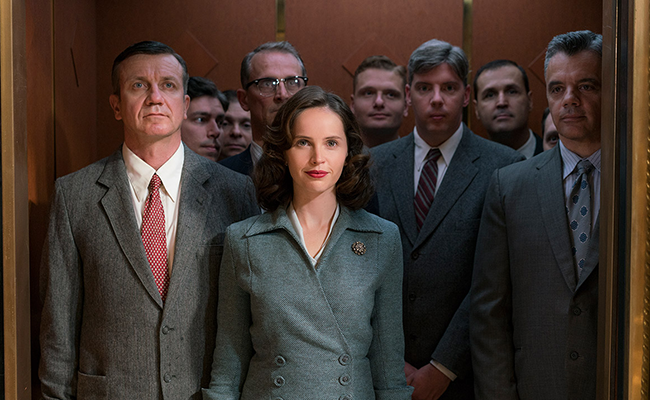 In the final shot of On the Basis of Sex, Felicity Jones as Ruth Bader Ginsburg, having slowly ascended the steps of the United States Supreme Court building in Washington, disappears behind a pillar. She comes out the other side as the present-day, 85-year-old judge. In the theatre last weekend, a voice—male, of course; elderly, disappointingly—rose from an adjacent seat: "That's the real one. She's still on the bench." His wife—assumedly—politely and disinterestedly: "What?" Man, having missed every point offered by the two hours he'd just watched: "She's still on the bench."

RBG's appearance is less egregious than recent male-helmed political films—like John Curran's Chappaquiddick, in which Jason Clarke's eyes become Ted Kennedy's; Christian Bale as Dick Cheney offers a direct address at the end of Vice that chastises the viewers for enabling his evil—because if Bader Ginsburg is divisive politically, at least she hasn't personally murdered anyone, or ordered it. This is not a look into her heart of darkness, because it doesn't exist. Her appearance is elegant and earned, a stamp of approval for a movie that has no problem highlighting her flaws.

In Mimi Leder's first significant feature directing turn since Pay It Forward (2000), Felicity Jones pitches Bader Ginsburg as a funny, ambitious, very serious law student, one of just nine in her Harvard Law school class. It follows her struggles of trying to be taken seriously enough to get a job—one New York firm tells her a woman will be too distracting to the boys—while juggling her home life.

She's a bad cook and a distant mother, the latter of which was touched upon in last year's RBG. Luckily her husband Marty (Armie Hammer), also a busy lawyer, can pick up the slack while also supporting her. It's he who hands her the case that made her career in 1972, when they co-represented a man denied a tax deduction for his sick mother's caregiver because he's unmarried—under the law only women or married/widowed men qualify. Bader Ginsburg wants to shake the system up with this tiny example of how many laws in the US constitution are designed, executed, followed and prosecuted—say it with us now—on the basis of the sex. (She wins.)

It's a classic Hollywood movie, that is to say zero percent edgy, immaculately filmed, scored with soaring strings. It could've been made anytime in the past 20 years. (The Post is also this kind of movie.) But it's only been in the past few that RBG's feminist iconography has set in, pre-dating #MeToo and strengthening since (and since Trump's election), and because of that the film feels vital, as does Leder being at the helm—in 1998 she made one of the biggest films of the year with Deep Impact ($350 million worldwide gross), then quickly lost Hollywood's interest because when female directors succeed, it's considered an anomaly. (That's still true, ask Patty Jenkins or Karyn Kusama or Elizabeth Banks or Betty Thomas or Amy Heckerling or Kasi Lemmons.)

Even if—despite the fact—men still feel the need to point out the obvious in 2019, Bader Ginsburg and Leder are much-appreciated proof that change takes time, is arduous and worth it.