Singing songs and making music became a protective shield from a lifetime of hardships. 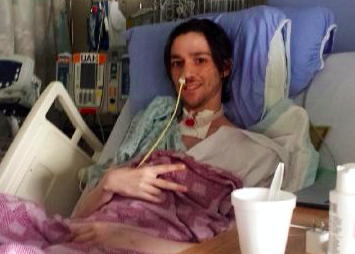 My first memories are a mix of Cystic Fibrosis and He-Man. Of hearing somewhere that the disease would kill me by 31 (the national average age), and bullies use it against me. I lived my life with that.

Music gave me great comfort when I was just six years old and onward. Jackson 5, Elvis, Pearl Jam, Zeppelin; they would give me an escape while never hurting me.

Spending weeks or months in a hospital, alone and for the most part confused, armed with my albums as more of a shield than any ammunition. My Walkman served as a GPS to my life—the soundtrack if you will. Singing that music when I was hit on my bicycle by a truck at full speed.

Flash to days later, out of danger but with a broken femur that already needed surgery and a broken collar bone. As I got better I learned guitar and have never looked back. My father told me while I healed to write my own stuff, create my own sound, be a true artist. I had no shortage of heartbreak to use as material for songs. Since that time, I’ve been in two bands that have spanned 15 years. I left the band here in Halifax about five years ago and by chance landed in Edmonton after first moving to Surrey.

Up until a few years ago, after numerous infections in my lungs, my life seemed over. Hooked up to oxygen 24/7 and wasting away to 123 pounds (my height is 6’4”), I ended up admitted to hospital in early January 2014 with severe trouble breathing, a burning in my chest—very, very weak. I alerted the nurse of this pain only to have her look at me like a drug addict. I was “to try a hot shower and see how it goes from there.” Never one to argue, I did as she told, bringing my heavy body and squeaky oxygen tank along with. thing I remember was trying to take my t-shirt off. I passed out—collapsed .

I needed an immediate lung transplant. Edmonton was one of only three cities in Canada that offered the surgery. My parents were given a choice to either have me for a week or two, fully conscious but drugged out, or agree to have me put in a coma and give me a month to find lungs.

Almost a month later, the doctor told my father I had less than 24 hours left. People from far and wide said their final goodbyes. Eight hours later they found lungs. One hour to be airlifted and another eight in surgery, with another major surgery a week later that was just as important in living.

Waking and feeling (muscle atrophy) and once again I had to learn how to walk, talk, eat. But most importantly; play and sing music again. That was my driving force when I would cry to let the torture end. I still had music (in the form of a docking station). Music has and always will be my shield. It’s the shield that still keeps me alive.

Some days are easier than others. Some days you may not even attempt at trying, but it's in this space you find your peace; your default setting; your presence of mind, drowning out the static that floats through all of our lives these days.

Pain is relative and the only thing we are guaranteed in life is death. Art is still out there for people who are seeking it. But most importantly find whatever it is that makes all other thoughts disappear—cooking, reading, working out, painting, anything that helps you and doesn't hurt anyone else.


Voice of the City is a platform for any and all Halifax individuals to share their diverse opinions and writings. The Coast does not necessarily endorse the views of those published. Our editors reserve the right to alter submissions for clarity, length, content and style. Want to appear in this section? Submissions can be sent to voice@thecoast.ca.