We know all about the robots, aliens, cowboys and giant alien robots. But what about more earthbound, independent film joy this summer? Here are a few possibilities. (As with all out-of-mainstream films, release dates are subject, even likely, to change.) 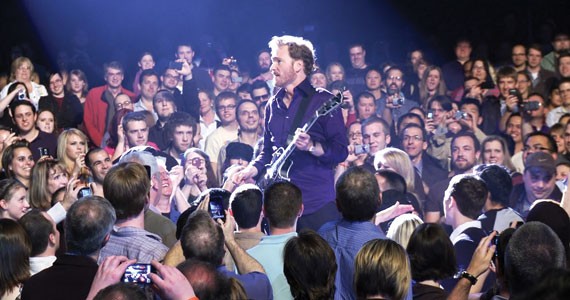 The Tree of Life

Newly begarlanded at Cannes, Terrence Malick's The Tree of Life has earned comparisons to 2001: A Space Odyssey. which is a tough connection to make given the pastoral, 1950s suburban glow of the trailer, where strict father Brad Pitt leaves lasting scars on his son's psyche, manifesting in grown-up Sean Penn. Malick's few films are all incredible sensory experiences, so whatever happens, don't miss it. Expected to open June 24.

A heartfelt picture about the relationship between Ewan McGregor's graphic designer and his father, played by Christopher Plummer, who comes out as a gay man in his 70s before being diagnosed with cancer. Based on writer-director Mike Mills' own life, it's funny, beautiful and sad in equal measures.

A series of films and talks about ocean conservation and sustainability, taking place at the Museum of Natural History at 1747 Summer Street (June 22, 7:30pm) and at Saint Mary's University, 903 Robie Street (June 26, 7:30pm and 27, 7pm) featuring work by filmmaker Sarah Bood.

The Khyber film series will be showing indie shorts and features all summer (check out their schedule here: khyber.ca/carbon_arc), but this is definitely one not to miss, as it will celebrate a year of alternative film screenings with a showing of work by the late, renowned animator Helen Hill.

Filmmaker Jacob Tierney follows up his charming comedy The Trotsky with another insular Montreal tale, this about three apartment dwellers (Emily Hampshire, Scott Speedman and Jay Baruchel) concerned with a potential serial killer in their midst.

A British indie comedy with strong Wes Anderson qualities (OK in my book) from first-timer Richard Ayoade, about a 15-year-old boy named Oliver Tate who wants to lose his virginity, meanwhile struggling with the suspicion his mother is having an affair with a neighbour. The reviews have been universally glowing.

A documentary about the tangerine-coiffed late night talk show host, whose beautiful life was shattered when his NBC bosses kicked him off his TV program and paid him $45 million in a settlement. Poor Coco. Purports to reveal his cranky side.

In a Better World

Winner for Best Foreign-Language film at the Oscars, Danish director Suzanne Bier's meditation on vengeance and masculinity is periodically didactic, but fascinating and finally rewarding. (I saw it at The Atlantic Film Festival in September.)

A prize-winner at Cannes for actor Juliette Binoche, I want to see any movie set in Tuscany about the relationship between an art historian and an antiques dealer. Really.

William James Murray, this is for you: The 11th alFresco is showing six weeks of Bill Murray classics, screening at the end of the Halifax waterfront, behind Bishop's Landing. Gates open for admission at 8pm, 9pm-ish showtime, bring deck chairs and blankets, with rain dates on the Saturdays). Here's the list: July 22: Meatballs, July 29: Caddyshack, August 5: Ghostbusters, August 12: What About Bob?, August 19: Groundhog Day, and August 26: Rushmore. Maybe Bill will even show up. Stranger things have happened.

From Lone Scherfig, director of An Education, the story concerns the relationship between college lovers Anne Hathaway and Jim Sturgess, visiting them on the same night every year as they get older.

Like Hitch, except with Steve Carell as The Schmo and Ryan Gosling as The Alpha Male instead of Kevin James and Will Smith. And likely a much better movie. Also starring Emma Stone, Julianne Moore, Marisa Tomei and Kevin Bacon.

John Madden directs an espionage thriller, which sounds a bit like Munich revisited. Helen Mirren, Tom Wilkinson and Ciaran Hinds play the older versions of Mossad agents who in the '60s hunted down a Nazi war criminal in East Berlin.

The oddest genre, the indie sci-fi picture, first since Duncan Jones's Moon. Here a second planet, just like ours, is discovered in the solar system, which coincides with a science student involved in a drunk-driving accident where she is at fault, and has to find a way to atone for her mistake.

Dominic Cooper stars in this drama about a man pretending to be Uday Hussein, Saddam's son. Directed by New Zealander Lee Tamahori, who once helmed a Bond movie, this looks a little like a Middle Eastern remake of Scarface, except based on a true story.

A horror fan event in Tatamagouche, with special guest Gunnar Hansen aka Leatherface from The Texas Chainsaw Massacre. For more info check out Tatamagouchegrainelevator on Facebook.