The co-owner of the One Life Surf School, instructing women on wave riding, environmentalism, leadership training and even surf instruction for guys, tells us what she does all summer. 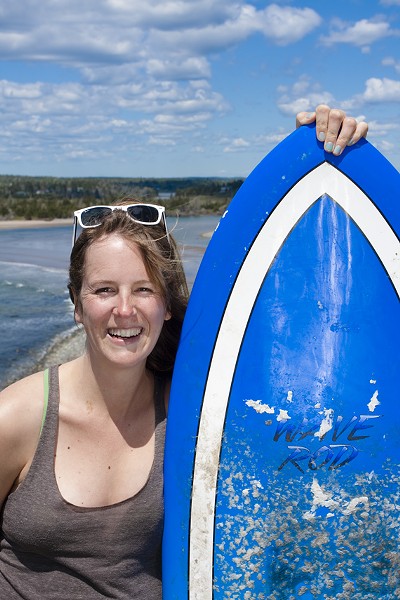 Amiro co-owns One Life Surf School (onelifesurf.com), which started in order to instruct women on wave riding, but has branched into such fields as environmental workshops, leadership training and even surf instruction for guys. This Lawrencetown Beach resident is also an actor---she starred in Eva Madden's award-winning Eastern Shore short---a certified stunt person and a unicyclist. In last year's Hot Summer Guide, we reported on her participation in a unicycle race across Nova Scotia, although she hasn't been up on the cycle in a while as she is expecting a baby in October.

The Coast: Can you surf while pregrant?

Beth Amiro: I'm still surfing, but it won't be long before it's too painful. And I'm really not very good at balancing right now.

TC: What are your favourite things to here in the summertime?

BA: Where to begin? I guess swimming. You can do it anywhere, whether it's a lake just outside of Halifax that you can get to by bus or many of the beaches. The water's finally warm.

TC: We're going to assume that as a surfer your tolerance for cold is higher than ours.

BA: Genuinely swimming without a wetsuit, it's the same as you. Although we've been known to get in our wetsuits and go into the lakes when they're colder, which is pretty nice.

TC: Do you have a favourite lake in town?

TC: What else are you looking forward to?

BA: The Luau and the Women's Surf Jam that happens every year. It's August 8. Last year we built a tiki hut and had mud-wrestling. It's really fun. I spend a lot of time in Chester, that's where my parents are. There's so much to do there in August, with sailing and Race Week.