How the band's latest album—Snapshot Of A Beginner—acts as both a mirror and update to its 2014 debut.

If time is a flat circle, there’s one band that has worn down its circumference, a sonic traversing turning into a deep groove filled with shimmery, dirt-speckled indie rock.

If time is a flat circle, there’s one band that can pick it up on its edge and roll it down the road in a Ravi Shankar-indebted, vibration-changing rhythm. If time is a flat circle, it’s little wonder that, despite being six years apart, Nap Eyes' Snapshot of a Beginner and Whine of the Mystic stand arms encircled, so sibling-esque, they border on fraternal twins.

If time is a flat circle, at least we have these two records forever pulling us into their orbits.

“And now that I have seen myself for what I am / I cannot go back to the field and flourish,”  sings band frontperson Nigel Chapman on “Though I Wish I Could”, the closing track of 2020’s Snapshot of a Beginner. At times, the song’s psych-rock-streaked, reverb-heavy sound overwhelms Chapman’s lyrics, an extra layer of glass muffling everything and refracting the light.

This is the first thing Nap Eyes fans will notice on Snapshot: How the instruments have been turned up and the band’s signature slumped-over, lo-fi fuzz has been turned down. Polished isn’t the right word here, but perhaps shimmering—more surfaces have been set ablaze than just Chapman’s lyric book.

On a zoom call with the band, Chapman is often the quietest, happy to let his fellow musicians—Josh Salter, Brad Loughead and Seamus Dalton—talk about influences and expectations for the newest album. (Salter says bass queen Carol Kaye was a major influence; Dalton adds his favourite song from the new album is “Even Though I Can't Read Your Mind” “because it sorta reminds me of  The Vaselines.”)

It feels like that moment on “Though I Wish I Could” all over again, Chapman’s response almost drowned out by bong rips, in-jokes and the band’s overall excitement to be chatting together, despite the distance of quarantine. (“How would we all record harmonies like the Backstreet Boys?” someone asks at one point, as the others wail with laughter.) Yep, he might be the de facto helm of the Nap Eyes ship, but this expedition calls no member captain.

But that lyric itself—and the desire wrapped within it, the desire to flourish—harkens back to earlier Nap Eyes territory: Specifically, to the ethos-setting line in “Dark Creedence”, from the band’s 2014 full-length debut Whine of The Mystic. “Got big plans, got big ideas / a lifetime to defend,” Chapman sings. From this opening track, the listener gets the undeniable feeling that something’s moving, something’s rolling, that takeoff has begun and inertia is being reached.


“The album's nine tracks sound nostalgic and new, with a Pavement-like force that meets the novelty of Chapman's slick vocals,” The Coast wrote of Whine back in 2014. "I write the bare bones of lyrics, simple chords and the melody," says Chapman in that same article. "Then we jam and everybody makes up their own part, like Neil Young's 'Everybody's Alone.’”

When the bandmates are asked how they think Snapshot will be received, Dalton answers first: “I hope they see it as a level up in a certain sense; cause we can level up again and we’re going to level up again.” While Chapman’s Lou Reed influence—something that routinely draws comparisons between Nap Eyes and The Velvet Underground—still stands strong, “I think that people are starting to move away from that a bit too and realize that, I mean, we’ve made four records and they all sound pretty similar so like, we got our own thing goin’ too. Nigel sounds like Nigel,” Loughead adds. 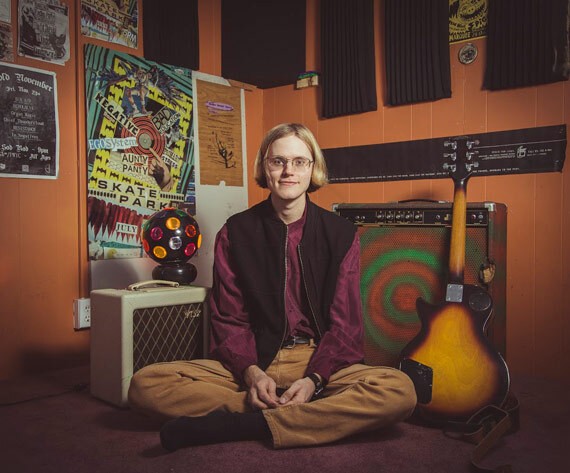 But of course, there’s another reason why these two offerings seem sewn at the hip, aside from lyrics that wink at one another and chemistry that feels palpable as soon as the needle hits the vinyl: Both feel like feet planted firmly at the foot of a mountain.

When Snapshot was released this spring, Nap Eyes was set to tour with Canadian indie legend Destroyer—the sort of move that proves you’re on a certain level, one past previous fame yardsticks like Nap Eye’s top-of-bill status at SappyFest or getting a record released on the American imprint Paradise of Bachelors. (Of course, COVID-19 meant that the Destroyer tour was left unfinished. “The Destroyer tour was good because it was the first time people were saying they had come to see us even though we were the opening act—but I feel like a lot of the momentum we gained got cut pretty hard,” Salter says.)

Pitchfork says that, on Snapshot, the band is “pairing a newfound lyrical confidence with sharper, more intentional arrangements that lend the project fresh weight.” Paste adds that “Each track unravels varying philosophical musings over the relaxing hum of low-key musicianship, as if the goal is to meditate rather than bop.”

It felt like the rest of the music world was catching on to what Halifax had always known about the grit-folk four piece. It was like The Coast’s 2016 cover story of Nap Eyes— prophetically titled “The music world is waking up to Halifax's Nap Eyes”—was suddenly a promise twice fulfilled. 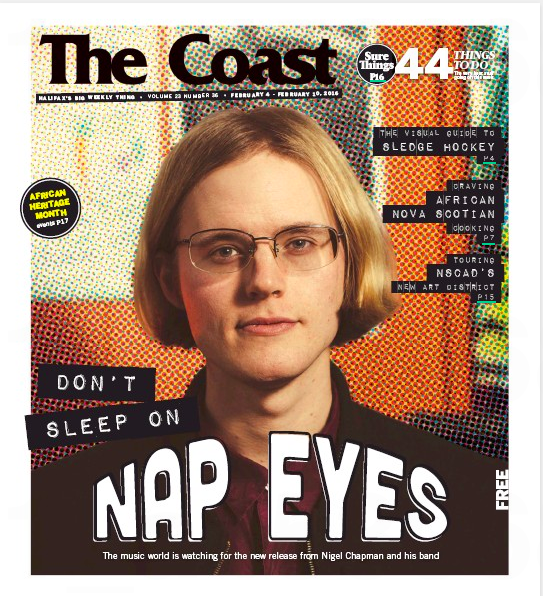 (Back then, our case for the band’s music world dominance was how big-deal magazines like “SPIN and Stereogum, and MOJO Magazine and Uncut in the UK, have praised Nap Eyes' songwriting as some of the best of its kind”—all while Chapman was getting compared to  Bob Dylan and The Modern Lovers' Jonathan Richman so much he must have been bored of the praise.)

Some fans won’t like the scent of ambition surrounding Snapshot. (In particular, the lead single “Mark Zuckerberg” stutters out of step with the rest, feeling if not like an aim at radio play, at least a long thought about it.) Some won’t like the crisper sound, the sludge being stripped back to silt. It's a record that doesn’t sit hunched on the couch at a party, the way early Nap Eyes’ music did. (There’s a reason why Pitchfork said Whine is “for the kind of drinker who does so alone.”)

But the worst thing that could have happened to a band so singularly unique, so rightfully lauded by critics, so busy ascending success on its own terms, would have been to play it safe.

Yes, Snapshot of a Beginner is a  breakaway from older Nap Eyes offerings, a sign the band may be leaning into a new era. And it is in this newness, in this departure, that it echos Whine of The Mystic most of all: It shows that once again there’s a timid dreamer, originally from Halifax’s south end, who wants to sing about Point Pleasant Park and has a totally different idea of what indie rock can sound like. It shows four friends who started playing in Gus’ Pub can get compared to some of rock’s greatest names—and live up to it—by trying, failing and trying again (all while holding the beat). It shows that, no matter how long you’ve been at it, keeping a novice’s vantage point can have its benefits.

As Chapman puts it, “Once I write a certain kind of song 20 times, then finally the universe allows me to write a different kind of song; I hope that trend continues.”