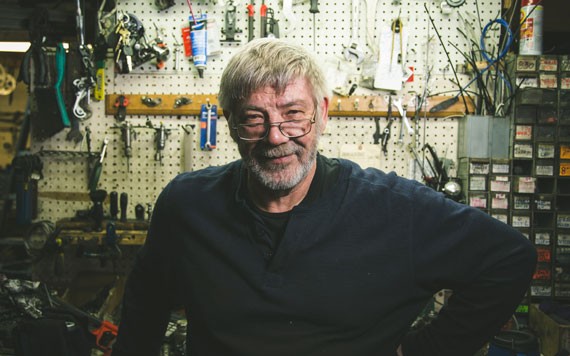 Dave Nauss is in Canadian Tire. He picks up some rust inhibitor in automotive and makes his way to paint. He needs some varnish to finish a project for his daughter. He scans the many cans and under his breath whispers, “Oh god. I didn’t realize there’d be so many kinds.” Help materializes. Len Russo has been the go-to guy for paint advice here for 15 years.

“You’ve helped me so many times,” he says to Dave, “please let me help you.” Dave allows it. Len asks how things are going at the shop and Dave gives Len the bad news.

“Oh no!” cries Len, distressed. “It can’t be!” He throws himself at Dave. “I’m going to chain myself to the door!”

This is the reaction of everyone who has heard the news, first delivered via Facebook in mid November: Nauss Bicycle Shop is closing. There has been a Nauss working on bicycles in this town for time out of mind. Dave’s dad, Jack, worked years at Calhoun’s before opening his own shop in 1968. Dave has been bike fixing for 43 years. He is 63.

Back at the shop Dave is in a version of his uniform: Two black T-shirts and loose blue trousers with oil-stained pockets. He has a bike suspended on hooks and he’s replacing the brakes. He limps. “No meniscus in my knee,” he says. “Did something stupid last year.” Being a firefighter wears a body down. “Carried more gear than I should’ve and jumped off tailgates. Anybody picked up the end of a wet couch, I would too. I got these hearing aids from sitting alongside that diesel for 35 years.”

The building is sold. There is one last piece of paper to sign so Dave won’t talk about what is going in the space. It didn’t have to be now, but now is a good time. “I don’t want it to be a job anymore,” Dave says. “I’ve had to get up in the morning too many years.” His wife Sharon is happy about this. Between the decades of firefighting and bike-fixing, Dave has been out of the house, all the time. “It’s going to be as big a thing for Sharon as for me,” he says. “But I’m going to stay out of her way. She’s been an angel: I evolved as a man very slowly. At least I put my underwear in the hamper now.”

Many parts and tools in the shop are going to Roger Nelson and Jenna Molenaar at Halifax Cycles on Almon Street. Some new bikes are going to the IWK and Dave is keen to get some bikes to a group collecting them for Syrian refugees.

He’s taking a few favourite tools home. “This frame tool,” he says, pointing at a big thing, “that was Dad’s.” Dave Nauss is a sentimental man who loved his father. For no particular reason he says, “Dad was the best thing that ever happened to me.”

This is it; there will be no bike-fixing in the basement. “I had someone come up to me and ask if they could bring their bike up to the house.” Dave mock-scowls over the top of his glasses. “No,” he says, “no.” December 15 is supposed to be the last day but Dave doesn’t have to be out by any particular date. Go on by. Step in onto the worn wood floor. Look around. Stick your head into the cavernous back room stuffed to the gills with parts and tools from every decade of cycling. You will not see the likes of this place again. Say a little something to Dave. Maybe shake hands, if only to feel the rough hand of a soft-hearted man who for so long has kept bicyclists on the streets of Halifax. You will not meet the likes of Dave Nauss again.