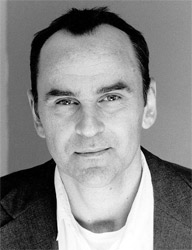 Thursday at lunch, Neptune Theatre was packed, packed, packed with subscribers, media, politicians and theatre people rustling wrappers from their free Subway sandwiches. But it wasn't the mini-subs that brought people out, it was the launch of the theatre's 2009-10 season, and a chance to meet George Pothitos, Neptune's new artistic director.

After an earnestly energetic "Go Wildcats!" number from High School Musical (whatever you think of Disney productions—that thing is going to kill), Pothitos dramatically emerged from a cloud of smoke. Pothitos says that the theme for the season is "hope," especially given the current economic climate, but as he explained to me after the launch, it was not a deliberate decision—it organically occurred as he was assembling the line-up.

The season opens on September 22 with the 18th-century romantic comedy by Marivaux, The Game of Love and Chance. There were plenty of "oooooooohs" in the crowd for David S. Young’s stage adaptation of Alistair MacLeod’s novel No Great Mischief. Fans of Skin Flick and middle-age sex romps will be happy to see Michele Riml’s Sexy Laundry. David Lindsay-Abaire’s 2007 Pulitzer-winning Rabbit Hole , about the death of a child, comes next March. Cynthia Nixon (Miranda in Sex in the CIty) starred in the 2006 Broadway version with John "Mad Men Roger Sterling" Slattery. Apparently, according to a NY Times review, expect a lot of tears.

I was praying for a Dirty Dancing Christmas, but man, judging from the crowd reaction, Neptune people love A Christmas Carol: The Musical. The season closes out with Peter Pan. I saw a production of this years ago at the Shaw Festival, and I will admit, there is something magical about the boy who will never grow up.

But the most exciting for me is the Studio Series and the return of Daniel MacIvor, who will be directing his newest work, A Beautiful View, starring the very awesome duo of Kathryn MacLellan and Jackie Torrens. Doug Curtis' Mesa is an unlikely buddy roadtrip. Rick Miller’s one-man, multimedia Bigger than Jesus is bound to hilarious, considering he is the same playwright who brought us MacHomer: The Simpsons do Macbeth.