Eight rising artists creating the fresh works you need to know about this year. 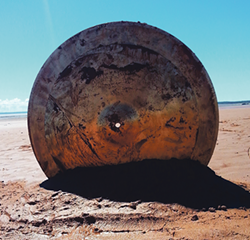 Lindsay Dobbin has always expressed themself through art, so picking a start date of their practice causes them to pause. Was it when they launched the music project Broken Deer in the early 2010s? Or was it when they began doing water-drumming performances circa 2015? If we're being honest, it probably traces back to childhood, when Dobbin was making Much Music VJ audition tapes and writing poems about the climate. The latter two pieces, in fact, are currently on display as part of the Gut Feeling exhibit at the Dalhousie Art Gallery.

"There's not really a separation for me between the music and sound work I do and the visual work," they add. "I love the phenomena of sound so much...the stuff I've been doing with drums, like taking drums to the ocean or in the landscape and exploring their materiality, not just their sound, in the landscape—so doing fun things like rolling the drum along the beach (see above) or floating it in the water and really exploring where the sound and the material meet—there's a lot of visual components to the work. But at its core it's always this interest in this relationship between the environment and sound."
—Morgan Mullin 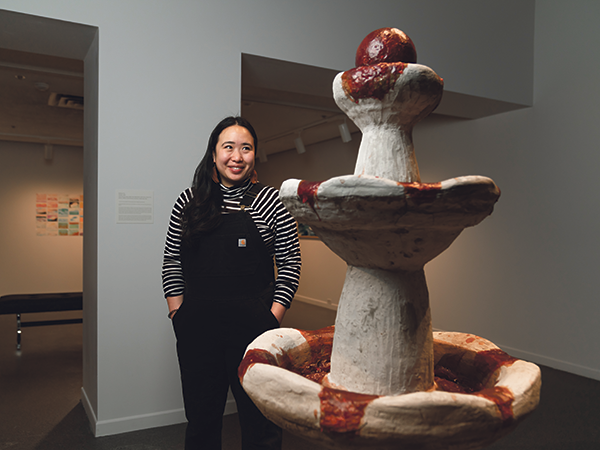 Stephanie Yee: How to make a point

Stephanie Yee wants to get you thinking. Thinking "about race, or the ways that society has failed us," she says, or about the messy strata where the two intersect. "I've always been trying to figure out: what is the best way to communicate something? When I was at NSCAD, being involved in student organizing, really questioning, like, does marching work? Do protests work? What are the most effective ways to communicate?" the performance and installation artist says.

Since graduating from NSCAD in 2013, she's been holding winking eye contact with these themes, softening sharp edges with an offbeat sense of humour in her works. See: the sweet-and-sour sauce-filled fountain on view as part of the Dalhousie Art Gallery's Gut Feeling showcase; An "imaginary prop" from a fictional 1980s Chinese restaurant, the piece taps into Yee's theatre background and penchant for, as she puts it, "expressing character or identity through objects." The imagined fountain builder might be, as Yee thinks, the fictional-restaurant owner's hapless brother-in-law. But, as the fountain's sweet-and-sour sauce filling coagulates, Yee's aim of subverting something into the absurd—to spark thought and smiles—reaches its goal.

Adds the artist: "I like the idea of creating a strong image, something that could be inviting and they can see all of the components. And maybe it's not going to mean anything to them at first, but maybe later down the road, they can flash back to that image," she adds. "Having things click later on: I feel like that maybe has the most impact."
—MM 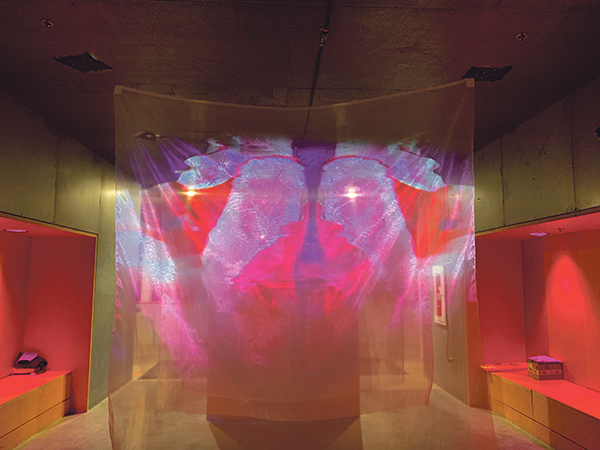 Karli Slauenwhite: Beyond boundaries and binaries

Karli Slauenwhite isn't the only one dreaming of a better world—somewhere that, as they put it, would be a "utopian place or planet where queer people can be freaks and be ourselves"—but they might be the only one bringing their visions to life in an audiovisual installation.

The Centre For Art Tapes media scholar's work Dream Soup—part of the CFAT scholars showcase—"layers colour, texture and sound as it explores the possibilities of pleasure and belonging in a fat body." In their gallery debut, they say the piece has helped them work through issues of self-worth. ("I'm a fat, queer person, being like hey, here are my rolls; here are these parts of me that are pretty frowned upon.")

"Art for me, right now, means an opportunity to reflect and create in a way that is outside of expectations or binaries," they add. "Art allows us to explore."
—MM 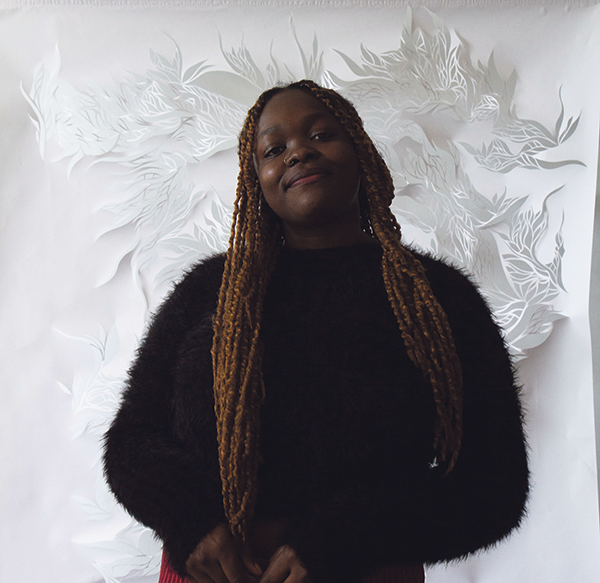 Francesca Ekwuyasi: "I can't be alone in this"

Francesca Ekwuyasi has been making art since childhood. Her work—be it film, writing or large-scale paper cuttings—"usually stems from something deeply personal and then me checking in with others to see if I'm alone. A lot of my art comes from that I can't be alone in this, and then others showing me I'm not."

This was palpable in her 2019 Khyber showcase, where she debuted a paper cutting and a documentary exploring queer people's connection to their faiths."Inherently, because of who you are and how you walk through the world, that'll influence your work," Ekwuyasi says. "I think everyone can make art."
—MM 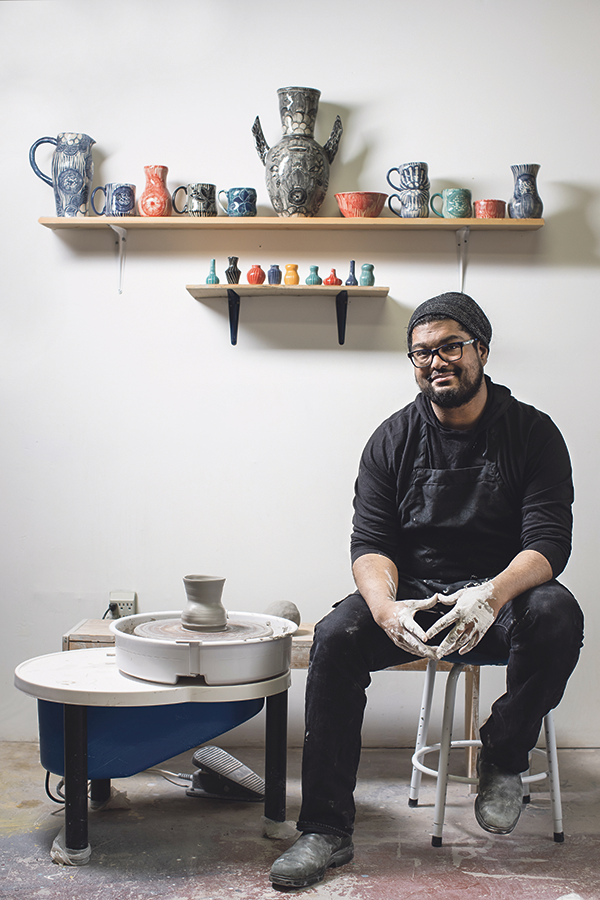 Kaashif Ghanie didn't even like ceramics at first. The plan, he recalls, was to come to NSCAD from Ontario and study sculpting. Then, "we did two days of pottery wheel and I got hooked into it—I figured it out," Ghanie remembers.

Today, it feels most fitting to describe his work as the best of both mediums: The grandeur of sculpture remains, particularly in the artist's works showing in the Centre For Art Tapes' media scholar showcase, where Ghanie created pots standing just under 30 inches.

But, the stomach-punching intensity of size is never betrayed by lack of detail. Distinct patterns inspired by prayer rugs flourish the artist's works.

"For me, by putting it on a pot, I try to invite the viewer but also I'm trying to show history that way," he adds.

The CFAT show sees Ghanie, who has been showing work in art galleries since 2017, incorporating sound into his practice. It's "me taking my ceramic vessels and combining them with a way I can convey the message of them," he explains. "I'm able to take dialogue I've recorded and put it in the pots, so both pots are speakers that talk about what and how I'm feeling."

"Each vessel has a place in ceramic history. One of the vessels is an apothecary jar of sorts and with jars, you bottle everything up, so I call it "Don't Forget" because I put all those memories in there." ("They called me chocolate face. Don't forget" is one of the refrains.) 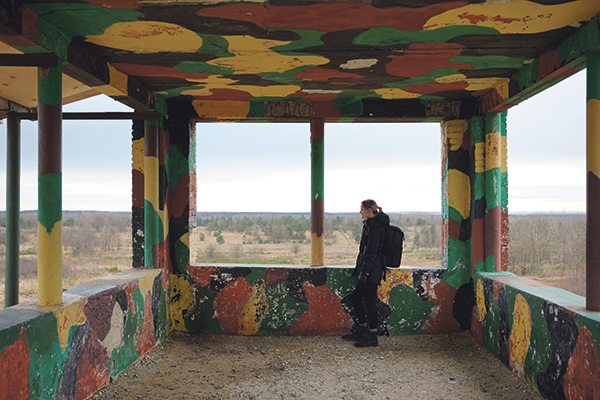 Jessica Wiebe didn't set out to make art about the military, but, after the artillery soldier was delpoyed to Afghanistan, the mixed bag of feelings she'd been left with kept tugging at her. Soon, pieces wrangling with, as she puts it, "reflections of militarism, military life, memory, commemoration, war and conflict"—like the checkpoint she built as part of Nocturne 2019—became a sort of calling card for Weibe. (She will even be showcasing new works at the Canadian War Museum in 2022 as part of the Canadian Forces Artist Program.)

But the artist, whose resume also boasts being the current Centre For Art Tapes artist in residence, says she's not trying to sway anyone's mind: "A lot of my work is bringing veterans, serving members and civilians together to create works and bridge the gap between military experience and civilian understanding of that experience."
—MM 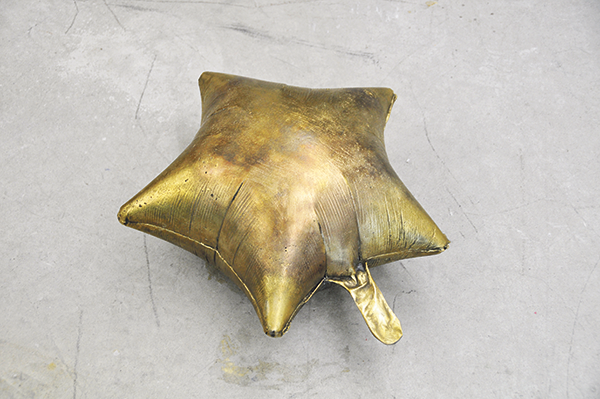 Sculptor Louis-Charles Dionne’s waterfront studio is littered with stone, wood and metal, waiting to be assembled and rearranged.

“Part of my process is to collect these objects,” says Dionne. “I put them in my studio, live with them for a while, and see what I want them to do, or what they want to do, and try to find a middle point.”

That middle point could be a hot water bottle made of bronze or bags of limestone chips. He also kept the dust from his most recent stone carving. “It makes you think about the action of making. What if the carving is not the carving itself, but the rubble of the carving?” he says.

The limestone rubble is from a stone carving of a fitted bedsheet that will be the focus of his next show, Headstones and Countertops. “I see it almost as a profanation,” he says. “Taking a sacred motif and bringing it into everyday life.”
—Michael Lake 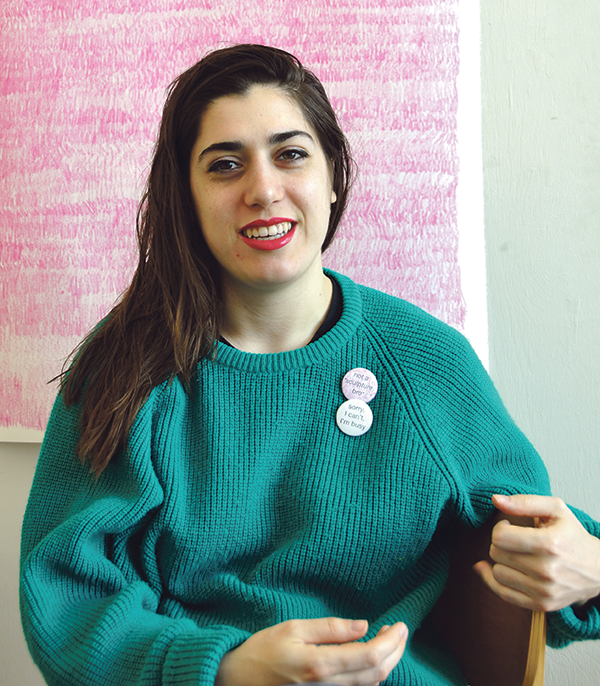 Camille Valcourt-Synnott: A revealing approach to the everyday

"I was using printmaking, but I was making objects or things that I could use after to do interventions in public space," she says. "Things that weren't just on a plinth or a wall in a gallery. I printed fruit stickers on vinyl. The things I was trying to reproduce were things in our everyday life."

In Valcourt-Synnott's studio, objects are arranged in themes: There are groups of bus transfers, crayons, fake fruit, cat figurines.