Hot (or not) hits from Halifax regional council 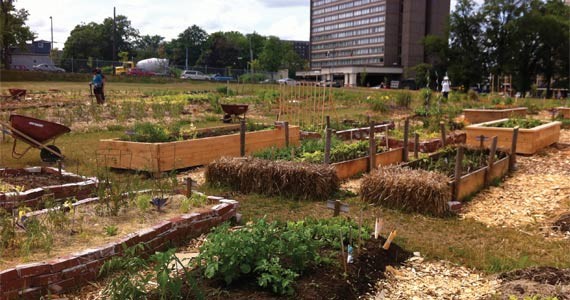 Common Roots Urban Garden gets the go-ahead
The urban garden gets approval to move just one month before the deadline to leave it’s home at the QEII Health Sciences Centre Emergency Department. The Bi-Hi Park sandwiched between Bayers Road and the exit ramp of the 102 will host 110 of the 200 garden plots that are to be moved. The remaining 90 will be distributed throughout the peninsula area. The move is set to happen on April 1.

facility for Sheet Harbour approved for next steps
Community members made the hour-and-a-half drive to city hall to hear councillors debate next steps for Sheet Harbour’s new rec centre. The community hopes to align recreation services, library services, a community kitchen, bar and event hall into one space. Councillor David Hendsbee says the project will “bring a rural renaissance to the area.”

Barrington Street greenway going forward
The stretch of road between North Street and Devonshire Avenue is set to get more pedestrian and cyclist friendly with a multi-use greenway. The stretch of road has gone down to three lanes for vehicles from four to prepare for the change. The project is estimated to cost $903,000, with the department of national defence kicking in a maximum of $882,360 of that, leaving the city to foot the estimated remaining $21,000 bill. Project work must be completed before November 30.

Closed-doors decision on
A motion to negotiate and approve a second purchase of the land associated with the Blue Mountain-Birch Cove Lakes Wilderness Park passed. After a decade of inaction on protecting the land behind Bayers Lake Business Park and turning it into regional parkland, it appears the city is moving forward. The motion also directed staff to keep working towards purchasing more of the land and accept federal funding available for the acquisitions and project.

Sable Island Institute to stay on at Point Pleasant Park
The institute’s stay in the gothic Gatekeeper’s Lodge at Point Pleasant park will continue. Council approved a year extension on the lease of the lodge which serves as home base for the organization off the island. The institute recently partnered with Parks Canada to reinstate a beach monitoring program on Sable Island and improve public outreach and programming. Previously, the building has been leased to artists in residence from 2010 to 2013.