Get your dumplings, your pasta and your halal food at these start-up spots.

Opening a new restaurant is never easy, and the public health order that shut down dining rooms isn't making that any better. But even in the time of COVID, local food entrepreneurs are still starting businesses. These vendors have been limited to operating solely online, getting their goods to customers via either curbside pickup or delivery service.

“Many people don’t want to make a line in front of grocery stores, so a lot of people order food and order groceries,” says Eungsub Lee, owner and chef at Gama by Lee, which operates out of the Halifax Brewery Market.

After immigrating from South Korea almost three years ago, Lee got food experience working with other vendors at the Halifax Seaport Market, and fell in love with the market atmosphere. “I like other vendors who help me a lot, and it’s a very good place for me to practice my English,” he says.

Lee was planning to open his Korean dumpling restaurant on April 1. But when COVID-19 hit Halifax, he was forced to change his opening plan, shifting to a website created by his wife who’s a graphic designer. Lee also called upon his experience as a part-time Skip the Dishes driver get his food to customers. “Through the Skip the Dishes experience I know how to deliver food without contact,” he says in a phone call. "I know how to sanitize my car and stuff.”

He’s planning on expanding to more food soon, like rice bowls and bibimpap, but for now, Gama by Lee sells two types of mandu dumplings: one vegan and one pork. They come in pre-made, vacuum-sealed bags.

When COVID subsides and the world returns to a new normal, Lee hopes to follow through with his opening plans for Gama.

“After everything becomes normal, I’m wanting to come back to the marketplace and open my food stand,” says Lee. “I like delivery without contact, but I more like to sell food face to face. I want to talk [to] people and I need to practice English more.”

But in the meantime, he’s filling dumpling orders as fast as he can and there is no shortage of customers. “I can say I’m busy, all the orders for this week are full,” Lee says. 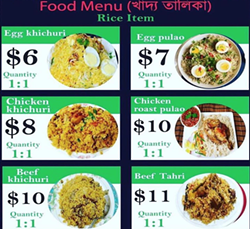 Over in Bedford, Halal food is being cooked up for delivery during the month of Ramadan by Country Foodstuff & Vogue.

The owner has been cooking in small batches, helping to bring people together through food during Ramadan while masjid (mosques) are closed. They’re excited to put their “cultural foods in front of the Nova Scotia people.” Dishes range from Indian khichuri rice to Bangladeshi roast chicken.

Other restaurateurs have built a local following on Instagram, using the social media platform for take-out sales. This includes north end Halifax’s Loner Pasta Co., which started its delivery services toward the end of April.

“It started out with just making a lot of pasta at home over the quarantine,” says owner Joe Martin in an email. Typically, Martin works as a chef at Stillwell, which is doing limited service during the pandemic, so he’s had a lot of extra time on his hands.

Martin’s pasta is small-batch and handmade, and so far Loner Pasta has featured rigatoni, spinach pappardelle and even lasagna noodles. They’ve also added Roma cheese from local cheesemaker Ciro Comencini to the delivery list, along with your pasta.

“Every Monday at 1pm on our Instagram we announce the menu for the week that consists of 5 different shapes,” explains Martin.

Along with up to 50 orders per week for the public—which sold out this week in 24 hours—Loner is also giving five free meals to front-line health care workers, who can email them to get their hands on some yummy pasta (first come, first served).

“The world is pretty glum right now and if we can make a few people smile I’m happy,” Martin says.

Although the small pasta operation is keeping Martin busy during COVID-19, he doesn’t know if it has legs long-term once he’s back at his regular gig.

“I’ll likely dial back to 1-2 orders a month to see where this could go,” he says. “It just currently occupies a lot of time and it would be difficult to balance that much pasta and work full-time running a kitchen.”