The number of women on Halifax council got cut in half. Now what? 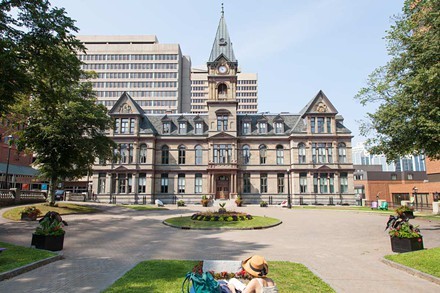 Lisa Blackburn, one of Halifax’s recently-elected councillors, is also one of the only women. She’s disappointed by that.

This year’s municipal election brought five new people to Halifax Regional Council, including Blackburn. For women overall, though, the results were dismal: Blackburn was elected in District 14, while Lorelei Nicoll won by acclamation in District 4. That means the number of women on council has been cut in half.

Of course, it’s worth noting that out of more than 50 candidates, only 15 women ran this year. Women can’t be elected if they don’t put themselves out there in the first place. So, why don’t they?

“It takes, in general, more persuasion to get women to run,” says Louise Carbert.

Carbert is a professor at Dalhousie University and co-chair of the Nova Scotia chapter of Equal Voice. The organization is focused on female participation in democracy. She points out that, while there are pros to running in municipal politics—no need to move homes, for example—it comes with its own set of challenges.

“You’re running on your own steam,” says Carbert. “There’s no political party to back you up, you’re not part of a team.”

A place like Wolfville falls outside the norm, with five women leading the six-member council after October's election. But broadly speaking, the proportion of women elected at the municipal level in Canada is about the same as those elected on a federal or provincial level.

“In fact, when you get to some of the really big cities in Canada, the proportions are sometimes even lower,” adds Carbert.

This might not be totally surprising when you look at how female politicians are called out—not for their policies, but for being old, ugly or shrill.

Carbert feels it’s difficult to say whether women face harsher criticism than their male counterparts. Even threats against politicians and leaders in general is nothing new. At the same time, “there do seem to be indications that women are coming in for more than their fair share of criticism,” she says.

“I guess what’s really startling is some of the women politicians coming forward and saying they regularly get death threats.”

Conservative MP Michelle Rempel, for one, has spoken openly about her scary experiences on Twitter.

“More research needs to be done here, but there does seem to be an indication that with social media, it’s become particularly brutal,” says Carbert.

Clare Beckton—the director of the Carleton University Centre for Women in Politics and Public Leadership—doesn’t know if there is evidence that women get the brunt of such things. She does, however, feel media outlets reveal certain biases.

“The media still looks at questions like, ‘how are you going to manage your family life?’” says Beckton. “They’ll focus on appearance, which they won’t do with the male candidates.”

For Blackburn’s part, she isn’t sure what else can be done locally.

“Already the city has some great programs to encourage women to run for office,” she says, adding that she attended a “women in politics” workshop last year.

On top of that, the Nova Scotia Advisory Council on the Status of Women runs a free municipal “campaign school” in an effort to get more female candidates. Lorelei Nicoll says it was one of the things that got her on track to run for council in the first place. Now, she’s a self-proclaimed “poster child” for the campaign schools and goes back every year to speak. Nicoll also says her history with youth athletics helped her run for office.

“You get your confidence, you work as a team,” she says. “I wasn’t sitting on any bench. I wanted to play.”

In a similar vein, Beckton believes girls need to be motivated from a young age. Student politics and role models can help.

“We are at a place where we shouldn’t even have to think about these issues, it should be just a given,” continues Beckton.

“We’ll know we have equality when we’re not concerned whether the candidate is male or female, we’re just concerned about what issues they’re bringing to the table.”

with files from Jacob Boon