No space for Halifax Roller Derby 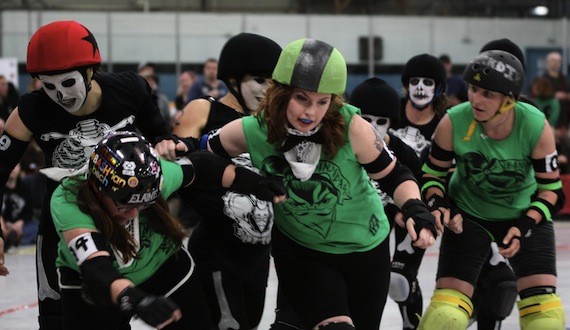 This all-female roller derby league is fierce, tough, unhinged and wildly passionate about their sport, yet they can’t find a permanent place to practice in HRM.

“It’s an ongoing problem,” say founding member and vice-president Sarah Densmore, known as Straight No-Chase-Her on the rink. “It’s been quite prevalent in the Maritimes, hockey takes paramount to everything.”

Since they first started strapping on kneepads, ripping holes in their fishnets and plummeting into one another on roller skates in August 2010, Halifax Roller Derby has struggled to find and keep an adequate practice space. Price, location and facilities are all concerns.

Last year, the all-female roller derby league practiced at George Dixon and Needham Community Centre, which are unavailable this year. And their usual saving grace, the four-pad arena on Hammonds Plains Road with a corporate logo, already has ice on all its rinks for the season.

“We’re at a standstill, luckily if the weather is good, we can use The Oval, which is great for endurance purposes,” says Densmore. “You have to deal with the public, where a number of us, including myself, have been attacked by off-leash dogs. We’ve been chased. We’ve been bitten.”

With over 100 members---skaters, referees, volunteers---in the league, Halifax Roller Derby Association played five home games last year, which drew a crowd of 400-plus derby-enthusiasts. Currently the entire league is at a standstill due to a lack of practice space.

“Not having a permanent space makes it harder for us to compete because we’re playing against leagues that do have that advantage,” she says. “We also sometimes can’t put down a track in some of the smaller spaces we’ve been in.”

Halifax Roller Derby Association includes women of all ages and back backgrounds---some are teachers, another a veterinarian and even a few stay-at-home moms. Roller Derby is an all-inclusive sport.

“It’s one of the few contact sports that is not hockey,” says Densmore. “We have a great community that is diverse, ranging from 18 to 40-something with all sorts of abilities, physical abilities, shapes and sizes. Girls come in thinking they are not athletes, and they finish our fresh meat graining and can look you in the eye and say they’ve become athletes.”

“We are where feminism has brought us. It’s a full on contact sport. A lot of us have names that play off of dominate male figures in sports,” says Densmore. “We take a lot of our rules from the NHL---like the contact spaces on our bodies. Everything is DIY, from marketing to our outfits. Everything we do is based on our volunteers, all are females from very different backgrounds.”