The state of Nova Scotia’s forests is explored through the magic of puppets. 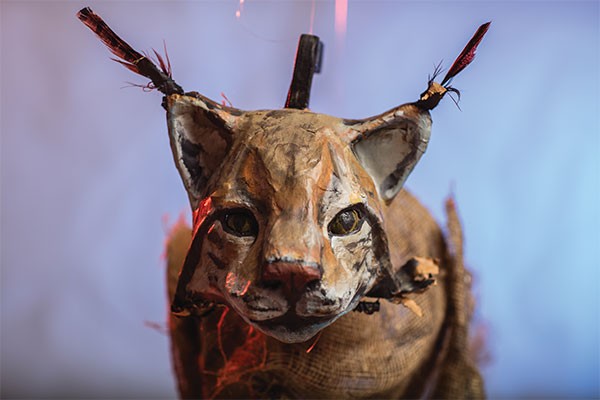 There are, perhaps, a million ways a story can be told, but for Laura Stinson, there's no way like puppetry. "I fell in love with puppetry because it involves performance and dance and music and visual art all together, but the focus is not on the actor or the human so much," she says by phone, speaking so excitedly one word seems to almost jostle the next. "It's focused on the puppet, which means it's free to be a symbol of whatever you want it to be. It can be a metaphor for anything. It can be any scale you want—it can be enormous, it can be small, and with all of those choices you bring something else to the show."

For this year's Nocturne festival, Stinson and a crew of pals (including exhibit co-creators Noella Murphy and Julie Stinson, who's also her sister) explore this vein of storytelling, delivering "a folk tale about appetite" with song and supersized puppets from the stage of Paul O'Regan Hall.

Titled Fox Hatch, Stinson says the concept was born "by talking out ideas over tea" with Murphy and Julie, discussing their latest inspirations and current events. The puppets themselves were crafted by Stinson over a two-month period, primarily out of cardboard and paper-mache. Puppets met performance as Murphy and the Stinson sisters swarmed Mermaid Theatre's loft studio space in Windsor for three straight days of workshopping.

The show's titular fox is "hungry so he's governed by his appetite—as we all are—and he interacts with this chicken and makes a deal that he won't eat the chicken if the chicken lays him three magic eggs. So, these eggs hatch and they kind of give him what he's asking for, which is strength—represented by the moose—and beauty, which is represented by a lynx," says Stinson. "And then he's frustrated because both of these wishes end up getting hungry and dying because they're endangered species in mainland Nova Scotia.

"Our setting is Mi'kma'ki and where we are now and what's happening here. I know Joan Baxter's book [The Mill: Fifty Years of Pulp and Protest] came out around the time we were thinking of this," she says. "And I was thinking about how frustrating the state of Nova Scotia forests are and thinking about all the wildlife that's disappearing and the trees that are changing and all of this destruction and the fact that Nova Scotia is still an impoverished, hungry province—yet we had all these beautiful natural resources, so what happened? What went wrong?"