Noises Off is spot on

The King’s Theatrical Society puts on one of 2012’s “most entertaining shows”. 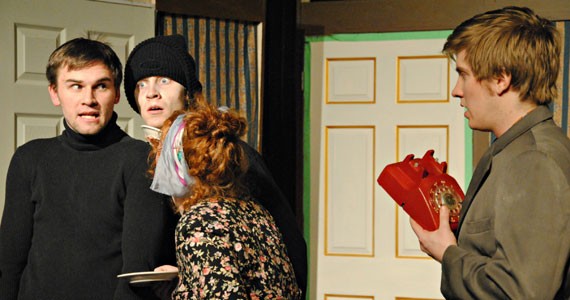 At $10, the hottest ticket in town right now is probably also one of the cheapest. That's right, for 10 bucks you can take in The King's Theatrical Society's fabulous production of the very funny Noises Off. The play follows a troupe of actors from creaky dress rehearsal to the hilarious goings-on back stage during a performance and then to the final, disastrous evening of its doomed tour. This show requires immaculate comic timing and an immense amount of energy, and this cast delivers in spades. While there's not a weak performance in the lot, Ana Matisse Donefer Hickie really shines as Dotty, the over-the-hill actress who plays the over-the-top housekeeper, as does Michael Beedie as the depressed and pedantic Freddie. Director Chloé Hung orchestrates the manic action with a deft hand, making this one of the year to date's most entertaining shows.