Nomad Gourmet rolls over to the Historic Farmers’ Market to serve delicious, locally-minded breakfast to the morning crowd. 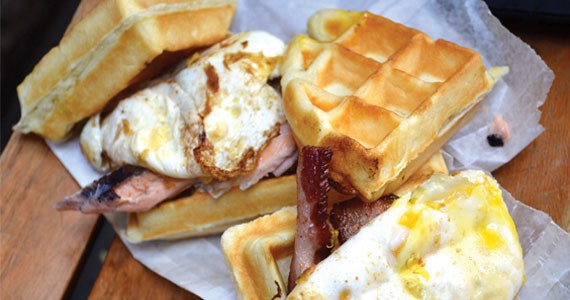 It's been over five months since Nomad Gourmet hit Argyle Street and started changing how Halifax satisfied its food truck cravings. Gone were the fish, chips and deep-fryers. In came Belgian waffle breakfast sandwiches, locally sourced burgers and burritos filled with pulled brisket, cooked in an onboard smoker. Every item was eight bucks or less, which meant that owner Nick Horne has got everyone from business executives to students lining up.

Overall, it's been a successful start for Horne, who recently moved his truck---decked out with a skillet-waving, bearded chef on the side---to the Historic Farmers' Market (1496 Lower Water Street) when his vending license expired on Argyle (he's waiting for re-approval). For over a month, he and chef Graeme Ruppel, of Coastal@Night fame, have been serving up breakfast on Saturdays from 8am to 1pm.

The new setup isn't cramping their style, though. Nor is the five-item, breakfast-only menu finding too many detractors. The reason: Nomad Gourmet is still able to offer fresh and filling food at a good price.

On the first Saturday I stop by my options are somewhat limited---they're out of tortillas. Instead of burritos, I opt for two Belgian waffle breakfast sandwiches---one with bacon and a duck egg ($5), the other with smoked salmon and a chicken egg ($6). The triangular waffles on both are at least an inch thick, but it's not a problem because the golden-brown dough is soft enough for taking manageable bites.

Still, because the waffles are so thick, their blandness dominates the flavour of the sandwiches, especially with the bacon option. On its own, the bacon (two strips) is thick with a nice balance of smoky and salt. The duck egg, beautifully cooked over medium, has a light flavour and any of the bright yellow yolk that tries to escape the sandwich is trapped in the waffle's impressions.

The waffles don't overwhelm the salmon option quite as much as the bacon. The thick piece of salmon has a thin charred skin on it, which complements its smoky flavour, and the chicken egg, again cooked over medium, has a crispy outer edge that gives a nice crunch. The few capers lend some needed saltiness, and the green goddess dressing (dill, chives, parsley, sour cream and lemon) tie the egg and salmon together quite nicely.

Two Saturdays later, I'm back for a breakfast burrito with sausage ($4) and breakfast poutine ($5). The first is made with a whole wheat, toasted tortilla that keeps the scrambled egg, onion, red pepper and sausage (from local provider Sweet William's Country Sausage) neatly together. The halved sausage has some spice to it, but just enough to wake you from a Saturday morning slumber. The egg is moist yet fluffy, making the sweet flavour of the onion and pepper noticeable in every bite.

The breakfast poutine is easily the tastiest item on the menu. The over-easy egg has a thick white, and the yellow yolk goes well with the home fries, crispy yet soft on the inside. The bright white cheese curds are spongy and large enough to sop up some of the rich, smoked gravy that's evenly slathered over everything and perfectly rounds out this poutine fit for a king hangover.

Although it's still unclear whether Nomad Gourmet will be back on Argyle Street this spring, one thing is for sure: wherever it ends up, affordable, unique and delicious local fare will be on the menu.