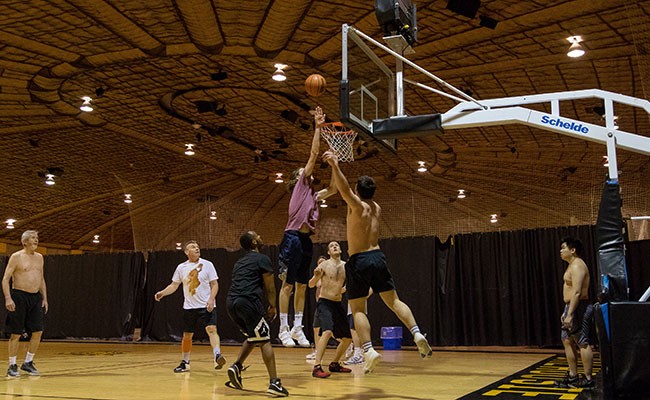 “Game!” a booming voice yells out with a hint of pride laced with exhaustion. At that moment, 22 people playing basketball end three simultaneous matches in the middle of a Friday . It’s Noon Hoops at the Dalplex and the four letter word signals that it’s time to switch it up and start a new round of games.

It’s just another day of four-on-four ball at Dalhousie, not unlike virtually every other weekday since Herb Gamberg started Noon Hoops in 1970 with the late Sandy Young.

“Basically Sandy and I grew up playing neighbourhood pickup. We decided implicitly, we don’t want it to be what pickup games were,” says Gamberg, a retired Dalhousie sociology professor who usually plays but is sitting out with a minor rib injury.

The pair didn’t like how pickup games had a tendency to allow the strongest players to hold the court, all with a brutal dose of lying and cheating. There’s no room for that at Noon Hoops where games go to 11 points (you have to win by two) and the winning or leading team on one court plays a different team of winners. If Gamberg sees a team is too strong, he’ll break it up and distribute the players to other teams.

“That’s the key, is to have fairly equal teams, rules in which everybody has a chance to play,” Gamberg says. Those rules have evolved over the years but aren’t actually written down anywhere. 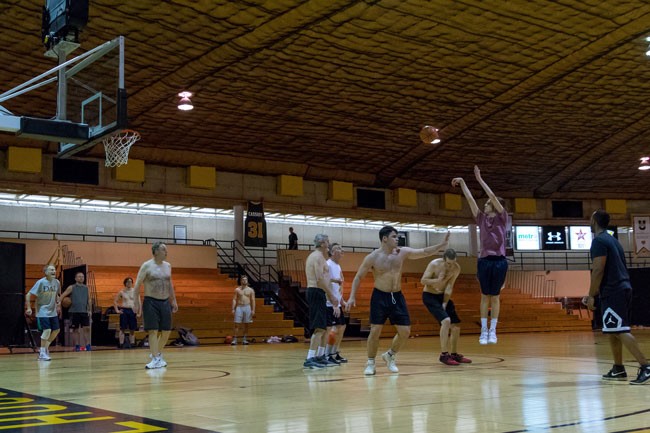 Wright’s the eldest of eight siblings, including five brothers, so when it comes to battling it out on the court—a little trash talk doesn’t faze her. “The majority are great guys to play with. They’re good, respectful and I find they accuse me of being harder on them than they are on me.”

Noon Hoops can also be a transformative experience. Daniel Diab has played for 12 since he was a student at Dalhousie.

“It was like my way to help me deal with school stress and stuff like that. It was kind of good because when I first came in I
overweight, I’d never played fundamental basketball,” says Diab, who now plays three to four times a week and works his schedule around the daily ritual.

An annual holiday tradition with Noon Hoops is for people to go to the Midtown Tavern, where Gamberg ranks every player one to four—one is best and four is worst. “I went from being an infamous four with no defence to, Herb said, a solid two,” Diab says, “someone you can rely on consistently.” 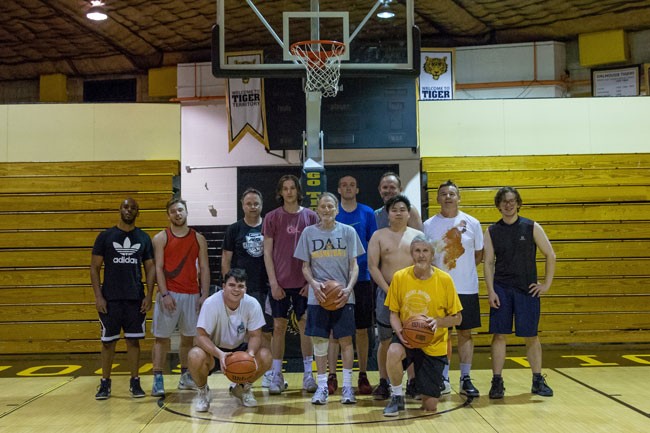 Both Wright and Gamberg enjoy getting exercise in a team environment as opposed to the solo settings of running, swimming and the weight room filled with what Gamberg describes as “medieval machines—that’s a torture chamber.” But aside from the health benefits, there’s one other not-so-secret ingredient that has allowed to thrive for 47 years.

“The only thing that keeps it going is the sheer pleasure of having something to do in the middle of the day, without stress and is wonderful fun,” Gamberg says. “That’s what makes it.”