The genre-blending three-piece drops a debut EP that's made with ginseng and honey. 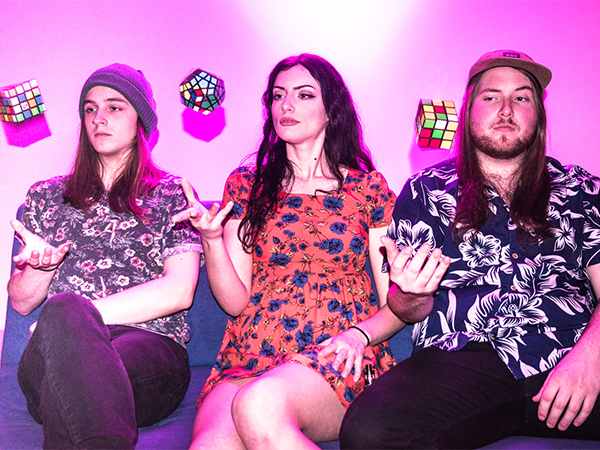 A lthough they hail from the Annapolis Valley, the three members of norc first met here in Halifax: Guitarist Zach Hazelwood and drummer Ryan Holland got together and played a show as a duo, but something was missing—or rather, someone. Enter Christiana Armstrong with her keyboard, synthesizers and vocal skills. (Armstrong is also in local bands The Pacé Family Orchestra and Izra Fitch.)

Fast-forward two years and the experimental rock trio are becoming seasoned performers—and now they want to give listeners something to stream.

"It was critical to get our music out there," says Armstrong, "so people have something to listen to, to start to understand our sound and vision."

And that sound, that vision? It's playful, sad, hypnotic and otherworldly. Listening to norc's debut EP with ginseng and honey feels like listening in on a lucid dream—an iced-tea-infused lucid dream, that is.

Along with the contents of those familiar tall cans, the genre-bending-and-blending trio poured a combination of sounds into their EP: "We draw heavily from the mind-bending plains of psychedelic rock, the twinkly telecaster guitar lines of math rock and impressions from places like electronic music, vaporwave, Studio Ghibli, video games, even metal," says Armstrong.

"We all love metal," she continues. "And there are some big moments, like the closing track on the EP, 'Obsidian,' where you can really pick up that we do love a good head bang. But in that same song, there's boppy, dancey, synth and math rock drumming."

There's a lot going on in five relatively short songs, which are a mix of instrumental tracks and vocal tracks. But it all comes together as something strange and beautiful.

"It's the start of a mysterious journey that we want to take listeners on," says Armstrong.

To that end, the trio is planning something immersive for the release party on Thursday at the Seahorse Tavern—something to engage their audience's ears and eyes.

"We are always looking forward to our next performance," says Holland, "but this one more than ever. It's going to be a huge celebration for us personally, with the release of the EP after years of work, so we're going all out for this one."

The music is a given—they're gonna lull you into their sweet-tea-soaked dreamworld. But the trio is also planning to turn up the psychedelic vibe with a light show.

There will be laser lights, H2O lights for that floaty, underwater feeling, and bright lights in an array of colours. Oh, and surprise: The first one hundred people will get a pair of holographic diffraction glasses which, Holland explains, "will dial the trippy factor to 11."

"Our show is an experience," Holland says, "one that we keep enhancing visually, as well as musically."