Not all homemade wines 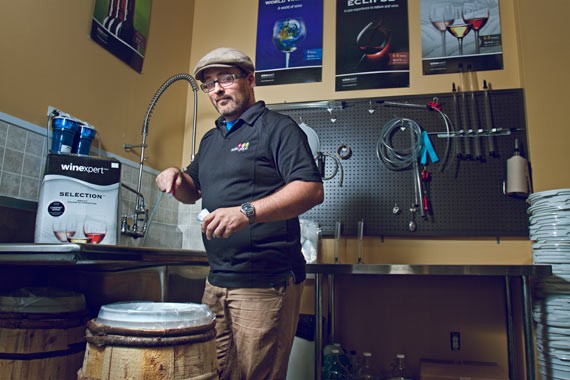 Don't judge a wine by its homemade label—yeah, the one that's just "Merlot" scrawled on a jagged strip of masking tape. It's a lesson for even the unsnobbiest drinkers, and sage advice that Noble Grape's Shean Higgins is quick to share with hesitant first-time winemakers. Not all homemade wines are that watermelon shiraz your friends served at their wedding—though they can be if you're into that—and they aren't the unmarked bottle your buddy cracked open three weeks too soon, either.

"Years ago the average uninformed winemaker would buy the cheapest kit, put that down, bottle it up, not think to age it and then start handing it out friends and family," says Higgins, the general manager at Noble Grape's Oxford Street location. "So you'd have a sip of something and be like 'Oh, that tastes like 'homemade wine,' when in reality if you'd have let that sit for a few months it could taste pretty close to your commercial counterparts, if not exactly the same."

Even since the ever-growing homebrew industry got an extra nudge upward in 2014, when on-site wine making got the go-ahead from the province, Higgins says about 60 percent of customers take kits home to make their favourite vintage there, while the other 40 allows Noble Grape to do most of the handiwork. (Seriously, all you have to do is sprinkle yeast and bottle.)

"The huge benefit of the on-site facilities is that there are so many people who'd never think to make it themselves—because they have two kids and a dog and a business to run and whatever," he says. "Now they can stop in and within five minutes be making wine. And the quality is there."

A walk through most home-brew/home-vint stores reveals a range of wine kits for all budgets and levels of patience. While in most cases you're bottling your product in five or six weeks, on the upper end of the quality spectrum you'll want to leave it that way—in the bottle—for six months or so before drinking it. A drag for those last-minute planning their winter hibernation, maybe, but Higgins says the waiting game is totally worth it. "Yes, you have to wait six months to a year, but you put one down today, put one down two months from now, and then a couple of months later and eventually the only wine you're drinking is aged wine," he says. "If you invest the time and invest the money, you end up with a very large collection of varying styles and ages."

Regardless of where you're putting down your batch—in your basement, or you closest u-vint location—Higgins says it's a foolproof process that if done properly can result in damn good drinking. Damn good drinking for three to five bucks a bottle. "And the $5 bottle, when aged appropriately, it's not your average $15 bottle," says Higgins.

Whether you're mixing up a sugary green apple riesling or a premium malbec, making a quick couple of cases for gifts or chipping away at your wine cellar, bottling on your kitchen counter or in-store, it's a pretty risk-free way to end up with 30 bottles of wine.

"You can make a number of mistakes and still have a perfectly fine product," says Higgins. "There are a few steps to it, but for the take-home customer as long as you follow instructions, it's just like baking a cake."

LISTEN TO THE EXPERTS
The folks who work at homebrew/home-vint shops—like Noble Grape, Wine Kitz, Maritime Wine & Beer—are happy to wax wine until your ears fall off, so take advantage. Above the hobby shops and brew shops, Higgins recommends researching via YouTube and forums like Brewnosers. And trust: "You really have to try hard to mess up wine."

KNOW WHAT YOU WANT
Make sure you pick the appropriate wine for your palate. "Sometimes it's not a matter of the customer not making the wine correctly, it comes down to picking the wrong style. What do you mean when you say 'I like red wine'?" says Higgins, again recommending winemaker wannabes inform their decisions with the experts. Or better yet, let them make the wine for you.

BE PATIENT
Whether or not the experts are making your wine, Higgins says make sure you let it age appropriately before trying it. Read the directions. Obey the directions. And play the waiting game once it's bottled. "We do our best to inform customers and really talk about the aging process and try to get them ahead of the game so they're not constantly drinking young wine. If you let something age for six months, there's no way it can't be good."