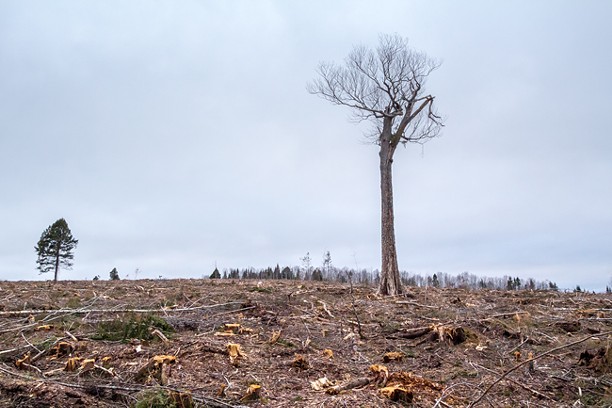 Raymond Plourde is trying to be optimistic about the province’s new forestry review, but it’s a struggle.

At best, says the Ecology Action Centre’s wilderness coordinator, the report is a mixed bag. The overarching idea to prioritize forest protection is laudable. But there are still some glaring omissions and dangerous proposals in the long-awaited document.

Released on Tuesday after over a year of consultations by University of King’s College president William Lahey, the 70-page report comes with 165 conclusions and 45 recommendations for changing the way Nova Scotia manages its forests.

The most significant recommendation is “ecological forestry.” The report suggests a paradigm shift wherein Nova Scotia looks at forests first and foremost from an ecological perspective, instead of as an industrial resource. But Lahey takes pains to stress the idea is not anti-industry.

“Ecological forestry's objective is not to protect the environment by eliminating or prohibiting forestry,” he writes. “It seeks to combine conservation of nature with a productive and profitable forest industry.”

Balancing commercial values against ecological concerns “as if they were of equal weight or importance” should not be how forests are managed, he continues, for the primary reason being that biodiversity is the “foundation on which the other values, including the economic ones, ultimately depend.”

Lahey proposes a “triad model” for managing Nova Scotia’s forests that would ban clearcutting on protected wilderness lands, reduce clearcutting across most of the province’s natural Acadian forest by way of a mixed bag of regulations and allow for increased clearcutting on woodlots where one species of tree has already been intensely cultivated for a specific industrial purpose.

Currently, 80 of trees harvested in Nova Scotia are felled by clearcutting. The practice accounts for 90 of the cutting on private woodlots, and 65 of the trees taken down on Crown lands.

Lahey recommends reducing that Crown-land clearcutting from 65 down to somewhere between 20 and 25 , though ironically his recommendations could end up increasing the number of trees felled as forestry stakeholders move to less-regulated private woodlots.

Given that 70 of the province’s forests are in private hands, having little to no restrictions for harvesting on those properties means “the worst of the worst can shift from Crown to private,” says Plourde.

“I'm not interested in seeing them get more opportunities to fuck up Crown land” tweet this
The triad model Lahey proposes is “straight out of the industry’s mouth,” says the wilderness coordinator. It allows forestry companies to ramp up clearcutting on private lands, continue clearcutting on Crown lands and doesn’t offset any of those losses with new protected areas.

“I'm not interested in seeing them get more opportunities to fuck up Crown land and to spray chemicals if we don’t see a bunch of new protected areas,” says Plourde.

Lahey’s report also recommends herbicide spraying on Crown land plantations, something the province informally turned away from since discontinuing public subsidies for the spraying of glyphosate back in 2011.

But it remains to be seen if any of Lahey’s recommendations will be implemented. In a statement, of Lands and Forestry Iain Rankin says the province will review and respond to Lahey’s report “as soon as possible.”

“I am committed to finding the right balance for the long-term environmental, economic and social interests of our forests,” states Rankin.

Nova Scotia’s old-growth forests have, over the past several decades, been largely transformed into pulp plantations for international corporations. Sixty years ago, before the pulp mills in Pictou and Port Hawkesbury went into operation, 80-year-old trees covered a quarter of the forest canopy. Four decades later, that number was reduced to just one .

Making things worse is Nova Scotia Power’s biomass burner in Port Hawkesbury, which opened in 2013 and was legally mandated—for a while anyway—to operate 24-hours a day. Instead of being fueled by “waste” wood like sawdust and bark, healthy forests ended up being cleared as faux “green” energy for the kiln.

Plourde says biomass is the biggest omission from Lahey’s report. There’s “nothing, no comment whatsoever” on large-scale biomass burns either here in Nova Scotia or from international firms that “chip and ship” local wood to foreign markets.

“[Lahey] was silent on biomass. Absolutely silent,” says Plourde. “We and many other groups raised this with him and I cannot believe he didn’t mention it.”

The forestry report is also silent on any reforms for the department of natural resources—now dubbed Land and Forests. Plourde believes that office’s cozy relationship with industry sycophants and a revolving door between pulp mills and senior government officials has eroded all public trust in protecting Nova Scotia’s wilderness.

Without a major shakeup inside the former DNR, Lahey’s recommendations won’t be much good. “The same prick bastards that undermined the natural resource strategy from the inside” will find ways to do it again, Plourde worries.

“I'm really trying hard to be happy and see the glass as half-full, but I'm really struggling.”