Global delays are making the province's decision to hold on to second doses worthwhile.

On Tuesday, premier McNeil opened the COVID-19 press conference by saying the province—which until last week was unsure about future vaccine shipments—would not receive any COVID-19 vaccines next week.

“We have some serious concerns about supply,” McNeil said.

But while both Pfizer and Moderna vaccines will be missing next week, there will still be 1,950 Pfizer doses and 5,400 Moderna doses delivered the following week.

“We still continue to be assured that this is a short-term delay and that the amounts that are held back now will be made up as we get into deliveries in February and March,” says chief medical officer Robert Strang.

However, thanks to the province’s earlier decision to withhold an equal amount of doses administered for a second dose, no one will be partially-vaccinated.

Some Canadian provinces have not done this, which has led to Ontario and Alberta residents waiting as long as 42 days for a second dose, and some Quebec residents waiting even longer. Strang says the suggested time between doses is 21 to 28 days.

“The last thing you want is people who may be partially immune from a single dose of vaccine and lots of virus circulating,” Strang said. “That is a recipe to potentially breed further mutations of the virus.”

In-depth details on who’s receiving vaccines and how many are in the province in total will be released each Tuesday, while basic COVID-19 test and vaccine numbers and are still released daily.

“When I was briefed this morning I was told that we will use all the vaccine we have before we get more. It’s unfortunate we are in that position but I think it also means, it’s a demonstration to Nova Scotians that when we get vaccine we very quickly get it into people’s arms,” says Strang.

Despite vaccine delays, the province continues to open more vaccine clinics, with four running this week—one each at a hospital in Halifax, Kentville, Truro and Cape Breton. Strang also says that the long-term care vaccine clinics at two Northwood campuses have now finished, and those at Harbourstone, Oceanview, and Parkstone are 98 percent complete (for the first dose–only three long-term care residents have received a second dose so far).

“By Thursday, an additional seven long-term care facilities across the province will have vaccine to start their immunization programs,” said Strang.

Strang also said a prototype clinic for those aged 80+ will open at the IWK sometime in February but couldn’t give many more details at this time. “These are community clinics that will help us understand what works and what doesn’t work,” he said.

The province has plans to set up prototype clinics in communities of First Nations and African Nova Scotian people but says this is even further down the road, in the beginning of Phase 2. Right now, Strang says he’s consulting with those communities. 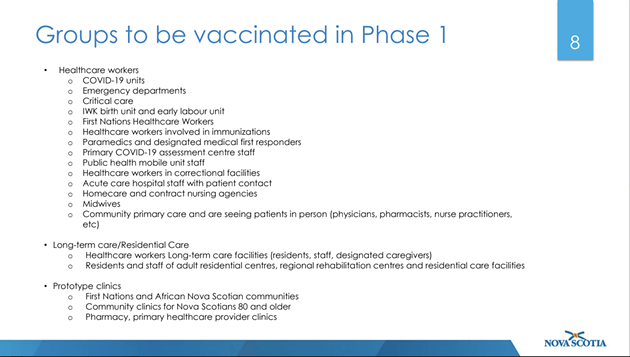 “We only have so much vaccine to go around right now, so exactly when we’re able to do our First Nations prototype clinics—we’re thinking we’ll do one or two—will depend on what we get in vaccine and the timing of the vaccine in February and March,” he says.

Strang says the main goal isn’t to ensure that these clinics are full of people getting vaccines right now while supply is still limited, but to ensure the capacity is there once supply is flowing.

“What we should take from this is that our vaccine supply is still uncertain and tenuous,” he says.