Your own Oval: We talk to local ice-lovers about their rinks. 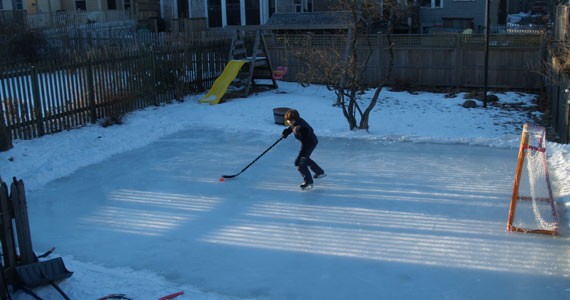 Hilary Rankin's rink on Williams Street
Rankin and her family created their first rink eight years ago. "I was pregnant with my fourth child and I needed somewhere for my children to go in the middle of winter," explains Rankin. "My daughter just started ringette this year. We have lots of hockey-playing neighbours now...but nothing with training superstars or anything."

After many attempts, the rink has grown over the years, aided by having removed a tree. It's now 30 feet by 30 feet. "It's been interesting, those teachable moments you look for as parents about global warming," she says. "Because of the way ice behaves when it gets wet or when a drop gets in it, how it creates shelfs. With what's happening up north it's like a little microclimate [in the backyard]. It's kind of cool." 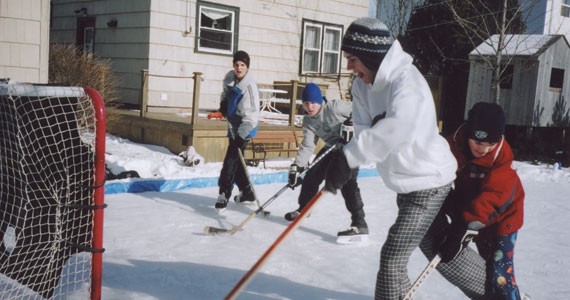 Clary Kempton's rink on Carver Street, Dartmouth
Clary Kempton's rink now exists only in memory and photographs. He had a backyard rink in Woodlawn for five years, something for his boys to play on until they finished playing hockey in their late teens. "It was a pretty good size, 20 feet by 40 feet, then 24 feet by 40 feet," he says. "My wife and I would watch from the kitchen window. When we had a lot of snow and you'd clear the rink, there was snow all around it and it looked like a pond in your backyard. It was a very natural-looking setting." Kempton's rink didn't have boards, but it did have netting in an effort to keep pucks out of the neighbour's yard. "That doesn't even help. I'm still finding pucks wedged in the bottom of the hedge, in all sorts of locations."

Kempton learned about the slope of his yard making the rink, a 22-inch dip from one corner another. This required bringing the frame made by two-by-six boards up to keep the ice level, using plywood and rebar at the joints to keep it in place. "A lot of pressure gets built up behind it," he says. "I estimated [it contained] 6,500 gallons of water. With a garden hose it would take 24 hours to fill it." He also discovered splashing buckets of hot water on the ice was the best way to keep the surface smooth. "It allowed for quicker coverage...it would blend and melt the imperfections as it went."

Aaron Merritt's rink on Jubilee Road
"Six years ago was my first one," says Merritt. "The organized hockey was a lot about drills, and I didn't find my youngest one," then-five-year-old Arlo, "really enjoyed it. He didn't get to play. I went, 'You need to play or you won't be interested.' I threw it in and it's developed each year, bigger and bigger. He [now] does really well, and it's attributed to the time put in at the backyard rink."

Merritt starts assembling in the middle of November, once the lawn stops growing. "You frame it in. I use palettes at both ends for boards. Then two-by-fours, two-by-10s, two-by-twos along the sides to keep the water in. Then you get a complete one-piece sheet of membrane, a tarp. I go to Halifax Seed and get one that's made for greenhouses, you can order it 140 feet wide and 120 feet long. My rink is 30 feet by 50 feet, so it's perfect."

Councillor Darren Fisher's rink on Lethbridge Avenue, Dartmouth
"Last year Darren wanted to make a small community rink so the local kids would have something to do," explains Doug Corkrum, co-owner of Sparkling Pools and Spas. "I was in a position where I thought I would be able to help." He describes the rink as being in the 40 feet by 80 feet range. Conrad Bros., another local business, donated two dumptrucks of sand for the bottom of the rink and SPAS donated the labour, equipment and hours to spread it out and prepare the base for the rink. "Now that the hard labour work is done, Darren and a few of his friends/neighbours usually handle the rest," says Corkrum. "This is an excellent example of how local businesses work together with members of our community to help create safe and fun things for our children to do."

The Oval, Halifax Common
Our own backyard rink is now ready for skating. For ice conditions and skate schedules, call 490-2347. It's never too late to learn how to skate, either, so visit halifax.ca/skateHRM or call 490-6666 to check the availability of the free lessons. (Adult lessons are Saturday mornings from 8:30am-9:15am and 9:15am-10am, January 21, 28, February 4, 11, 18 and 25, and require registration. Call in advance, they are popular!) Helmets are mandatory for learners (available on site, along with the skates) and wrist-guards are recommended. 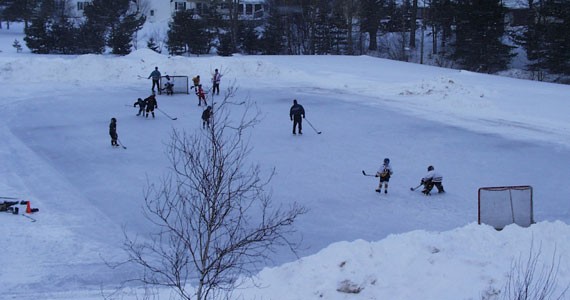 Bill Sampson's rink in Middleton, NS
If we were to choose the greatest backyard rink in the province, this one would definitely make the shortlist. Sampson created his first outdoor rink in 1986, leveling off a piece of land in his backyard. It was about 10 feet by 20 feet with two by 10 planks as boards around the sides. "In 1990 we built a new house and I made one on a vacant piece of land in my back yard for a couple of years then moved it eventually to a piece of land between my house and my business," says Sampson. "When I walked home occasionally through the back property I kept noticing a nice natural shallow swale that collected water naturally and froze into a small rink. I got a brainstorm to work on it in the spring to make it bigger." Utilizing a small tractor with bucket and rototiller on the area, he worked the landscaping, continuing to enlarge it. "I added a backstop, official size nets, too, and a lightswitch on the light pole and then the neighbourhood kids would be able to turn on the light when needed." With the help of the local fire department helping to provide water, the rink is now Olympic size, 200 feet by 100 feet, "but it has been even larger in past years with a cold winter. It is designed to expand as more water is added or if we get a rainy day."

Though Sampson's son, Greg, is away at university, he still helps with the rink every year, as he has done the past two decades. "It is great to see young hockey players out on the rink all day long without having someone telling them how to skate and handle the puck."