Takes money away from students who go out of province 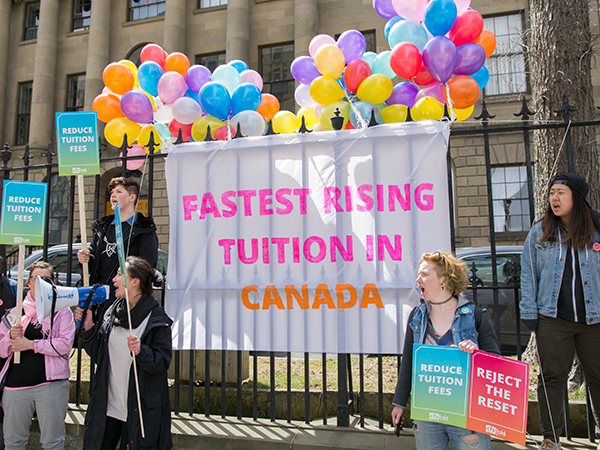 Aaron Shema is student union president at Mount Saint Vincent University. He thanks the government for its work on helping students who are from the province, but says it's not going to help as much as they think.

"It's a small step in the right direction," says Shema, "but it's not going to help international and out-of-province students, which make up more than half of the Mount population."

In 2015, out-of-province and international students made up 40 percent of students in the province.

Lianne Xiao, the incoming chairperson of the Canadian Federation of Students-Nova Scotia, has concerns with the restrictions of the program. "This program is a Band-Aid fix to a larger problem, there are many restrictions," they say. "One of the restrictions is people who do not complete their degree and are not able to access this program, so it's a failure to help those who need it the most."

Previously, students could only apply for forgiveness of up to $20,000, and only if their total (provincial and federal) debt totalled more than $28,000. Students who graduate prior to August 1 of this year must have a total combined government student loan debt greater than $28,560 to qualify for forgiveness. But for those graduating after August 1, the whole value of their loan from the Nova Scotia government doesn't need to be paid back, no matter what amount it's for. (The maximum amount given as a loan is $20,400.)

With the implementation of the new program, government will be phasing out grants for Nova Scotia students choosing to study out of province, meaning they'll likely be collecting more debt. The department of labour and advanced education states its desire for "more Nova Scotians to pursue their post-secondary education here at home, and stay here once they graduate."

Nova Scotia tuition fees are among the highest in the country. Tuition continues to increase alongside this new loan forgiveness program. Both Dalhousie and Mount Saint Vincent Universities will increase tuition by three percent this year, and Dalhousie's international students are looking at a 8.1 percent increase. NSCC—whose students are exempt from the loan-forgiveness program—announced Tuesday its tuition will increase three percent each year till 2022 for the majority of programs.

The NDP responded to NSCC's announcement this week by calling on the Liberal government to make post-secondary education more accessible. The party believes tuition fees at NSCC should be free, eliminating financial barriers to a community college education

Shema, like Xiao, thinks this is just a Band-Aid for the problem of tuition rises happening in the province. He echoes the need for supports for international and out-of-province students: "Investment money to universities to reduce tuition rates would help as well."