yep, there was a fife

a really shit photo of cousins.

loves cousins and hating the man

Woke up on Thursday feeling a little fuzzy, but there was another Cold Warps show at 2pm so there was no time to dither around, moaning.

We headed down to JangBang Bar and Grill, a tiny little spot that serves Korean tacos. There we sat in a fog of booze sweat and found a clutch of Halifax folk, including the estimable and babely Shannon Webb-Campbell and Stephanie Johns. Army Girls opened up. These Blocks Recording Club kids have been getting lots of buzz in T.O. and justifiably so, I think. Lead singer/guitarist Carmen Elle is a ripper and oozes easy, unassuming cool. As Steph and Shannon walked in she was playing the guitar behind her head as easily as brushing her teeth, and the room kind of gasped around me, and I'm pretty sure I was grinning like a fool. Good times, Army Girls. Listen to the jams here.

Then Cold Warps played again, and did very well, considering they were probably more tired than I was and had to drive to Sarnia later that day. A bunch of folks who had been at the show the previous evening at Parts and Labor were there, I noticed. We danced. It ruled.

After a bit of a rest stop at home, we headed out again to check out Hind Legs - backed up by Alex Currie and Jenna Empey of Fuck Montreal - at Rancho Relaxo. Again there were tons of Halifax folk around and it was super fun. We also enjoyed a slice of Massimo's pizza, which I have been craving since I first moved here. 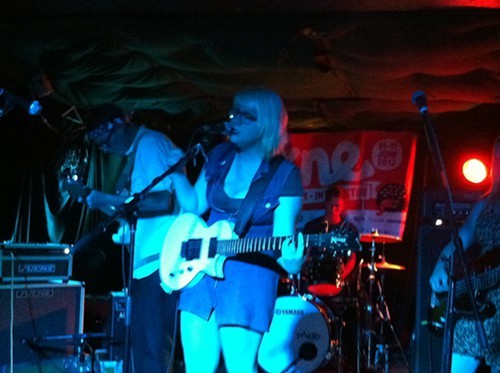 Then we biked to the Drake Hotel. I am not the biggest fan of the Drake. The drinks are expensive as hell and it feels like everyone is coolly appraising each other and no one laughs. But we were intrigued by the possibility of catching B L A C K I E, who the internet described as both "harsh-wave" and "the Hulk to Gil Scott-Heron's Bruce Banner" (props to Little Red Umbrella on that one!) First we had to sit through the Toronto group Doom Squad. I wondered if their name was a cute play on Jennifer Egan's A Visit From the Goon Squad and then I realized I didn't care. Rather than attempt to describe the band, I will share a photo of my notes:

Then we watched B L A C K I E set up his own sound system, which appeared to be a bunch of heavy duty amps piled on top of each other. Dude took off his shirt and tapped his foot with his back to us for awhile. Then he hit play on his iPod and BOOM. YELL YELL YELL! Lyrics I can't decipher! Chest and head beating! Seems very angry! Getting in your face! Grinding on the floor! Jumping around fuck! Very sweaty indeed!

This one was taken right after he kicked a glass candle holder off a table and smashed it.

For someone described as an "affirmative rapper" this guy seemed really angry. My companion accurately described him as the best hardcore frontman without a band that he'd ever seen. It felt like he was yelling about important, genuine stuff, but over the wall of noise-grime and his screams, I couldn't understand it. While I was glad I saw a bit of B L A C K I E, there is only so much of this type of shit that I can take in an hour. In some ways I am very grateful that this anti-music spectacle happened at the Drake. We left and giggled as a woman in high heels and a fancy dress and a man in a pressed suit walked jovially down the stairs, completely unaware of what they were walking into.

Then we biked to the Velvet Underground for Cousins. Lots of Halifax stuff going on! I guess that means I miss Halifax. There was also a decent buzz for Cousins' set (they were due to play at 2am that night too, and are playing again tonight at a $30 BBQ on Manning Street.)

There were some sound issues and guitar shit happening but Aaron and Leah were typically charming about it and the audience loved them. There was a fortyish guy who looked like Michael Douglas in Falling Down beside me wearing shirt buttoned up to his collar and a black tie, and he was looooving it, fist-pumping and whooping it up.

Then we went to the El Mocambo to check out A Place to Bury Strangers. Billed as the "loudest band in New York," we were duly stoked, as was the packed room. The first song was pretty insane - heavy bass and propulsive drumming, crazy spooky lights and a weird thrum that exploded into wild, Jesus and Mary Chain-style guitar histrionics. Not a lot of vocals. They are like uber heavy weird post-rock. Cool stuff, especially if you like weed, but not something I would put on while cleaning the house. As the guitarist and bass player scraped their instruments against the ceiling of the venue, I was pretty enthralled. As the set continued and each song sounded progressively the same, I was less enthralled. Then a bunch of drunk girls kept falling over and we left.

Then at last we went to the Silver Dollar Room to see the band I had been waiting for ALL DAY. I fucking loved Bleached. The two Clavin sisters Jennifer and Jessica - formerly of the mighty Mika Miko - delivered a note-perfect set culled from their three 7", "Searching for the Past," "Carter," and "Squeeze." Perfect sunshine pop-punk with a tiny bit of grit. They also unleashed the sweetest cover of the Misfit's "Horror Business" that I've ever heard. Best band of the day, and they play for two more nights so you (or me, most likely) get to see them again!

Then this adorable girl came up afterwards as we stood outside and handed us demos of her own two-piece band, Puffy Shoes. I'm listening to the CD right now. It's awesome. I thought she was so great that we took a photo together.

Then it was 4am, so we went home and DIED. See you later!