A Halifax architecture firm and creative homeowners collaborate to create a work-of-art residence in Fall River. 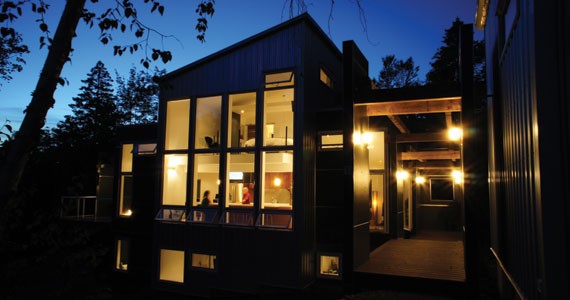 "We didn't want cookie-cutter. That was the driving force."

So explains Bill Maclean, lives in a custom home in Fall River with his wife. The surrounding area has a number of typical suburban units, but this triangular, bosky property inspired something else. "I've been interested in home design and architecture for a long time," says Maclean. The manager of a research and development lab, he didn't have any direct experience in designing or building houses, but has studied architectural history, including the Arts and Crafts design movement and Mid-Century Modern. That led the couple to the home they now live in, proving you don't need to be a professional to imagine your ideal living environment, even if it cleaves from the typical. "You see traditional around here all over the place. There's no distinction. It's ubiquitous and omnipresent. Quite frankly, it's boring. So, modern has always appealed to us."

The Macleans turned to Halifax's Solterre Design, a firm specializing in sustainable construction and green architecture. 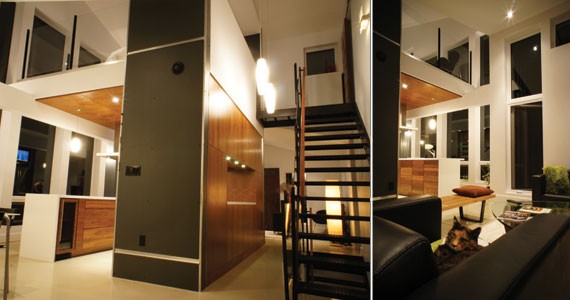 "They wanted a pretty contemporary project. It's fairly atypical compared to most," says Solterre's David Gallaugher, who says the design period was gradual, with lots of input from the clients, over the course of almost a year. But the result is a unique and beautiful residence, tucked away on a sloping hill, surrounded by trees. "You have to take this circuitous, long lane into their property. It's almost like an oasis in the middle of suburbia."

The Macleans approached a number of architectural firms when planning the place, and some refused them instantly due to their limited finances---less than $400,000 for construction. They managed to swing a deal with Solterre, though Maclean admits that they weren't able to keep to their initial estimated budget. "From what I've seen, the first time, everyone is out. Total was a lot more than we wanted to spend, but it's normal. Once we got in there, it was worth the time and frustration," he says, laughing.

The Macleans' home is marked by an open living/dining and sleeping area, with a less-than-grand floor space, approximately 2,000 square feet. The home is essentially a one-bedroom house---an industrial steel metal-grate open-riser staircase leads you to the upstairs bedroom loft. It's not necessarily the most practical design if you're looking to invest. "They disregarded any thoughts of resale value and designed a house that suited their needs particularly," says Gallaugher.

Solterre's reputation as being environmentally conscious is reflected in the design, with south-facing windows allowing for passive solar heat to provide 30 percent of the home's heating needs. "We were most concerned with energy efficiency," says Maclean. The rest of the heat comes from a propane-fired in-floor radiant heat system in poured concrete on all levels, except for the loft and the bath. The highest temperature recorded in the loft is 34 Celsius degrees, and that was in January. "When the sun comes out, the house is hot," says Maclean.

"The sun informed all the elevations and the roof lines," says Gallaugher. The house is sided and structured with cement panels and Galvalume siding, which provide a great track record for durability. The industrial-look to the fireplace is provided by sheet steel, intentionally rusted. A hidden panel hides the wood storage.

"We really like our kitchen," says Maclean, with its walnut wood finishes and its galley layout. It's very long, allowing two people to work there comfortably. "It's lots of elbow room for just the two of us."

The design also allows for additions to come in the near future, including a green roof over the entry catwalk and part of the deck, as well as additions to the adjacent woodshop and parking pad. Maclean outlines his plans: "We're going to install a solar hot water heat system and put in a garage."