In October 2010, brother and sister Heather and Christian Rankin were returning to their hometown of Halifax after each spending time in Europe.

“At the time I was working in software and had been for about 15 years, and I just wanted to move back home and I wanted to change careers,” says Heather. “Christian and I just both had sort of a vision of the kind of place that we ourselves would want to go into. And so we just set out with that idea and we just kind of made it work.”

The duo (no, they’re not part of that Rankin family—but there are multiple siblings involved in the family biz, so there’s a few similarities) wanted to embark on a venture all their own.

“There’s five of us kids, Mariah is a sister of ours too, she’s the youngest,” says Heather Rankin, gesturing to another dark-and-curly-haired woman behind the bar. Heather appeared in the door of Obladee on a sunny fall Tuesday afternoon, unlocking it and beckoning The Coast in for a chat in the hour before the restaurant opened.

Rankin effortlessly glides through the restaurant she knows like the back of her hand, offering drinks and food and the comfiest place to sit. She waters the green plants that line the window ledges, she knows the best light for photos is in the cozy nook behind the front door. The decor inside Obladee matches Rankin’s bubbly personality.

“The idea was to open a place that felt a little bit like a coffee shop and that was really important to us because wine can be a little bit intimidating for people, and we didn’t want a really fancy wine bar that would be a barrier to people enjoying wine,” Rankin says.

“It’s hard to imagine now, but the scene back then was really different. There was a lot of I would say kind of chain, hundred, hundred-fifty seat restaurants, owned by large groups. Or even smaller sort of corporate places, and that was sort of the scene,” says Rankin. “So, this idea that two young people, we were youngish I guess at that time, would come in and start their own place was a very foreign concept to Halifax. It just wasn’t done.”

Rankin says she was inspired by the few independent restaurants in the area at the time—like Morris East, opened by Jennie Dobbs in 2007. “That was revolutionary for the city. The idea that you could do wood-fired pizza, that you could have a small little spot, that it was independently owned and operated by a young woman. It was very cutting edge for the city,” she says.

Obladee’s goal was to create a space that felt comfortable, small and mature, in contrast to Halifax’s downtown bar scene that was “designed for students.”

“If you were over the age of like 25, 26, and you wanted to go someplace for a drink, maybe not a meal, there really wasn’t anywhere for you to go,” adds Rankin.

When selecting the wine itself, Obladee prides itself on variety.

“The idea is to feature wines from all over the world, different grapes and blends, different regions, different price points and different styles. So with any wine list, you want to have variety so that anybody walking in here has something to choose from,” says Rankin.

The small spot offers 30 different wines by the glass and more bottles in the on-site cellar. Obladee also has classes and wine education in various formats, from bachelorette parties to aspiring sommeliers.

“We try to use whatever Nova Scotia does really well, and they happen to do wine really well, specific styles of wine in particular whites and sparkling and roses, and even some light-bodied reds,” she says, by way of explaining that
the Nova Scotia terroir is heavily featured. “But if you want a big, sort of full-bodied red like a cabernet sauvignon or a malbec or something like that, we’re not really going to fulfill that need with our Nova Scotian wines, we might order, bring in wines to fill that niche.”

And the food does the same, Rankin adds: “The dishes are all designed to go and pair with all the wines on the list, so that’s a really key objective of ours.” 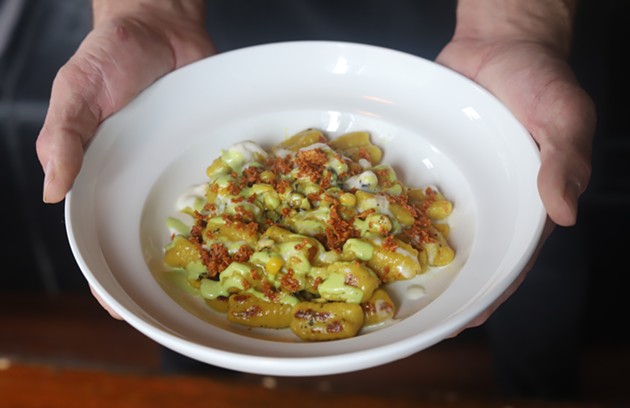 The menu started small but has grown with the years.

“When we first opened we only had cheese and charcuterie, and that was what we became known for very early on. And it was a little bit of a revelation for people at the time, this idea of cheese and charcuterie and it was kind of an educational process getting people to understand maybe, what that was and how they might like to try some cheeses, different milks, those kinds of things,” says Rankin, while co-chef Joel MacLellan is busy prepping for the day ahead.

Rankin says it’s been interesting to see how Halifax’s wine tastes have grown with time. “On average more and more people are becoming more mindful of what they put in their bodies,” she says, saying people tend to be more interested now in organic, low sulphite or low-additive wine.

But many people still don’t know the difference between what Obladee serves and what you can get anywhere. “I think people have a romantic notion about wine, that it’s made by hand and it’s made in a cellar by a Frenchman with a tweed cap. And there’s still a lot of that going on, but wine is big business too and there are massive factories and industrial machines pumping out gallons and gallons of wine, and putting stuff in the wines that are not super good for us,” says Rankin.

Rankin says Obladee is trying to move towards sourcing wines from independent or artisan winemakers, and as she puts it, getting to know “the human being behind the wine.”

“It’s much more healthful,” she says. “I won’t say healthy, it’s still an alcoholic beverage, but it’s better for your body, it’s more digestible and it supports a more sustainable business model for smaller business.”

In the months since Covid first hit the province, Obladee has barely missed a beat. In the early days, it did take-out wine and cheese boards, which it continues to offer, even after re-opening the dining room with fewer tables to allow for social distancing.

“But during the lockdown, it was very busy. We had friends and family help with delivering,” says Rankin.

Now, social distancing means the formerly 70-person restaurant now seats a maximum of 30 patrons—usually much less because people tend to come in pairs of two. “We can be full in here with 18 people,” says Rankin.

Covid also means people are spending their going-out dollars more wisely. “they want to go somewhere that gives them the most bang for their buck, and I think that means delivering on sort of the traditional principles of good service,” says Rankin.

Recently, the wine bar's famed Wednesday night jazz and Thursday night Celtic music have returned. “I think that is another added value for people who are still contemplating about like, why should I leave the house? What’s a good reason for me to leave the house?” adds Rankin.

In the ten years of growth, Obladee has seen the city develop around them and the restaurant industry mature.

“Places like Field Guide, Highwayman, Stillwell, Little Oak, Ostrich Club, those little places popping up that are sort of like-minded businesses, where they are owner-operated and they are run with care,” Rankin says. “And the customer is put first, the product is really cared for, and I think there’s definitely been a real movement in that segment of the market.”

But Rankin is quite comfortable where she is. “I think there’s a lot of ways to grow your business without growing in size, you know?” she says.

With only four servers, two chefs, and Rankin at the helm, Obladee has carved out a spot of its own in the market. In the coming months, it’ll complete a small renovation of the interior.

“When we first opened it was very much a bar and people would come in and treat it as such and people would stand up and they would crowd around these barrel tables and they would come up to the bar and they would order, and that’s how people treated Obladee,” Rankin says. “Now over the last few years, people treat it more like a restaurant. They come, they want a seat, they want to sit down, they come on a date, they come with one other person. And so, we’re just changing the interior of Obladee to kind of suit the way people are using.”