OFF! on my mind

OFF! and Descendents in Yonge-Dundas Square

My photos were unfortunately terrible due to my poor skills, so here are some press photos that only capture a fraction of the awesomeness of both OFF! and Descendents live. 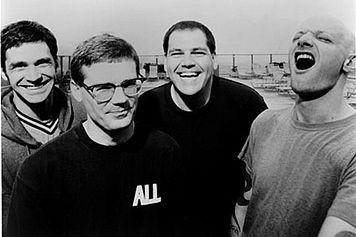 Because of some race that was going down Bay Street traffic was bad and we missed Fucked Up. But I won't cry about that because OFF! were so amazing that it made up for it.

People were happy, the square was packed, Keith Morris went on a rant about how being a child molester was one of the worst things a person could be and that he'd known his band since they were 11 or something. It was a hard train of thought to follow, made more difficult from the fact that their songs are so good they make my head spin. He also said the square looked like Japan. They were playing episodes of "How I Met Your Mother" on the big screen above the stage. Something for everyone!

Descendents played to an enthusiastic crowd. It was another head-spinningly awesome set. Someone threw a bottle that hit Milo square in the face and instead of throwing a fit, he continued as if nothing had happened. It was a classy way to deal with it. He brought his two adorable kids on stage to perform "All-O-Gistics." His daughter read "Thou shalt not partake of decaf" as "Thou shalt not partake of death," which is, I'm sorry, WAY more badass. People threw up, jackets were cast aside, people were getting down, they played "Lucky" and "I'm the One" and I got misty-eyed. What a great night.