The Halifax architect has spent the last 10 years paying homage to east coast landscapes with his award winning designs. 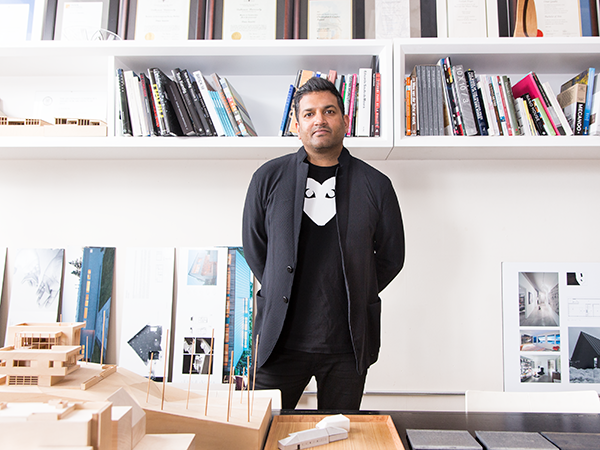 Omar Gandhi is a storyteller. The architect treats each building as a blank page onto which he weaves a narrative of time and place. "I want our projects to be an extension of a story," he says. Before starting a project, he contemplates the rise and fall of the land, its historical use, the people who have occupied it and even the direction of the wind.

In 2010, he founded his self-titled practice, Omar Gandhi Architect, which has spawned a lot of buzz in 10 short years and now includes a sister studio in Toronto. In 2014, his team won the $50,000 Canada Council Prix de Rome. In 2018, OG Architect—in collaboration with Design Base 8 in New York—was awarded the Governor General's Medal in Architecture. Last fall, Gandhi taught a course in architectural design at the Yale School of Architecture.

He credits his love of the creative process to his father. "In Indian culture there is often an emphasis away from the arts, but it was something my dad was really passionate about," he says. Growing up in Brampton, Ontario, he enrolled in a regional arts high school, and later studied environmental design and architecture at Dalhousie University.

On April 11, Gandhi will give his first local lecture at the Halifax Seaport Famers' Market. "Defining a Process" will explore the highlights and lowlights of being a creative person. "It can be isolating, and you may find yourself in a dark place every so often, so who you surround yourself with is important," he says about the lessons he has learned.

When he takes on a new project, Gandhi says the most important part of his creative process is familiarizing himself with both the clients and the landscape.

One of his projects, Sluice Point, near Yarmouth, sits atop a gently rolling hill. When he first looked at the landscape, Gandhi noticed the marshland surrounding the hill was dotted with centuries-old wooden structures designed to draw hay. When he squinted his eyes, they appeared to be soft bumps on the horizon.

"For that project, our intention was to preserve the quietness of the uninterrupted environment," Gandhi says.

The entire house is clad in cedar and the walls taper down on the ends. If you squint, Sluice Point could pass as another bump on the hillside—perhaps even a second, smaller hill emerging from the first.

Meanwhile, Rabbit Snare Gorge in Cape Breton juts straight out of the land, its sharp roof reaching exaggeratedly for the sky. The cabin's namesake comes from a local elder whose family has lived near the property for generations. He told Gandhi that as a kid he used to snare rabbits in the area with his siblings and cousins. In that sense, it was a child's wilderness playground. Drawing on that, Gandhi designed the cabin to possess a childlike persona. Many of the building's proportions are skewed: The roof and windows stretch vertically, and even the steel windbreak at the entrance is thrice the normal size.

Often described as "Nova Scotian-inspired," Gandhi's work pays homage to nostalgic east coast characteristics, such as old sheds and gable roofs. he says the local environment also plays a role in his work by influencing the building materials and design features he chooses. His projects must be built to weather the snow that accumulates during the winter, the sideways winds along the coast and the pelting rains.

"I would be really happy if people looked at our work and thought it was quintessentially east coast," he says, "because that means the architecture is telling a story about this place."