On journalism and biting the hand that feeds you 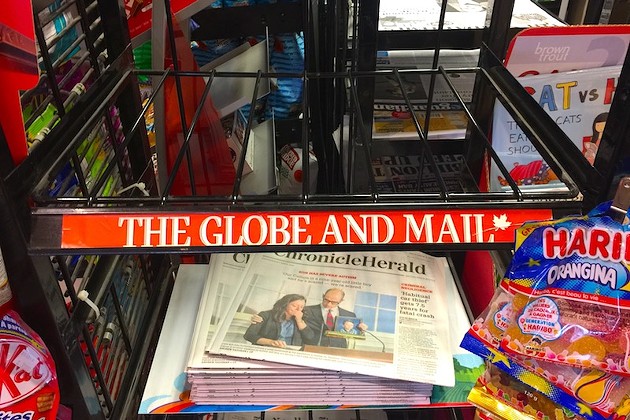 THE COAST
Papers like the The Globe and Mail and Chronicle Herald should be careful about what money they take from the federal government.

SUBMITTED
Michael Karanicolas is a human rights advocate who works to promote freedom of expression, government transparency and digital rights. You can follow him on Twitter at @M_Karanicolas and @NSRighttoKnow.
Over the past few years, plenty of ink has been about the dire financial straits that the news industry is in, particularly when it comes to high quality, long-form journalism, which is expensive to produce. A robust news industry is an essential pillar of democracy, and we all have an interest in making sure newspapers can stay afloat. But the news industry is also facing a crisis of legitimacy. The constant screaming about “fake news” may originate south of the border, but it has echoes here in Canada as well. The funding plan raises a lot of questions.

In some countries, subsidies to journalists are used explicitly as a tool to control critical coverage. The government has promised that eligibility for the funds will be determined by an independent panel comprised of members of the news and journalism industry, who will also be tasked to “promote core journalism standards [and] define professional journalism.” But who will choose the members of this panel, and what safeguards will be put in place to protect its independence? Just a few years ago, Stephen Harper’s government used the tax breaks that Canada grants to charities as a weapon to attack his critics, particularly environmental groups. Since many of these groups depended on charitable donations, Harper’s audits threatened their ability to stay and chilled their willingness to challenge his government. Creating a dependence among the news industry on tax credits risks giving a future government the same kind of leverage to keep reporters in line. Just imagine if Donald Trump had the power to put CNN out of business!

The subsidy for local non-profit outlets who produce open source news content under a Creative Commons licence is also worth considering carefully. It could well backfire by further degrading the willingness of Canadians to pay for content, undermining the viability of existing, for profit, local news outlets.

None of this is to say that the programs are a bad idea. They may be the only hope of pushing back against another growing trend, where news outlets are bought up by wealthy patrons. This can be incredibly corrosive to democracy, as the people of New Brunswick can attest.

David Simon, of The Wire, and himself a former Baltimore Sun reporter, once responded to calls for government subsidies for the newspaper industry by saying: “High-end journalism can and should bite any hand that tries to feed it, and it should bite a government hand most viciously.” I generally have faith in the ability of Canada’s journalists to stay independent. But it’s not enough that they remain independent—people need to believe that they are independent. Canadians should keep a careful watch over any program which has the potential to expand the government’s influence over the very people that are meant to be holding them accountable.

The coronavirus has lessons for journalists covering the climate crisis

By Kyle Pope and Mark Hertsgaard

And then there's the climate crisis

"I know this is bad, but you’ve got this"