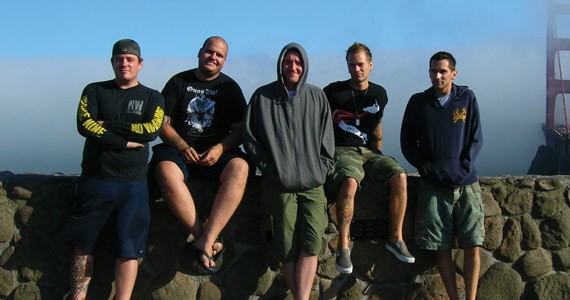 Risky Business' humble beginnings didn't foreshadow its rabid popularity for much of the mid 2000s in Halifax (or beyond). The most successful hardcore band in Halifax's history is reuniting for one more show on Saturday, August 18 at a venue close to its heart, the Pavilion.

Guitarist Ian Hart reflects on the band's origins: "It was very much a casual thing, we didn't expect it to catch on. We started back in 2004 almost as a half-joke and didn't really expect much to come of it but for some reason people heard the demo and liked it, and we got offers to put out records and play shows and we just decided to go on tour a whole lot."

They went full steam ahead: Three tours in the States, two in Europe, a bunch of Canadian trips, a demo, a full length and a split seven-inch later, Risky Business said sayonara. "In 2007 we ran out of steam or something like that. We just decided to call it quits and have a final show."

While most of the band members are still very involved in other bands (Hart plays in Envision and Word on the Street) they might be past the point of 10-week tours. "I think I'm done with that these days," says Hart.

Since the early days, touring was one of their main goals, and they never imagined it to go as well as it did. "I remember a show in eastern Germany where everyone knew our songs and we were like, 'How is this even possible? How is this happening?'" The fans at Saturday's show may not be German, but they will most certainly be singing along just as loudly.

"It's been five years and we thought it would be something fun to get everyone together and come out for one more show," says Hart. They won't be reuniting for good, because while Hart and drummer Dave Prime live in Halifax, two band members now live in Toronto (singer Mike Scarth and bassist JD Gaudet) and guitarist Mike Trainor lives in Yellowknife. Travel time aside, the group welcomed the opportunity to play another fun set at the Pavilion.

The strength of the all-ages scene is something that has long been important to the band, and Hart has noticed a shift in the past five years. "There are a lot more house shows and bar shows. The house shows are still all-ages but the other shows aren't," says Hart. "I'd like shows of the punk nature to be a bit more inclusive."

He says fewer all-ages hardcore shows at a mainstay all-ages venue like the Pavilion is a sad fact these days, one that he's happy to help change with Saturday's show. "I think there will be a lot of people at the show that haven't been [at the Pavilion] before," says Hart. "A lot of people jumping around, singing songs, jumping on people's heads...in a good fun way.

"We're not too serious, we're a fun band. I don't think we ever made any attempt at being anything more than that."

Risky Business may not have attempted more than that, but since its first show in 2004 to this weekend's reunion, its influence in the city's music scene can't be denied.