Ashley LeBlanc Some tired festival goers cool off in what little ways they can..

Ashley LeBlanc The hill behind the two larger main stages.

Ashley LeBlanc The Still on the Meg Stage

Ashley LeBlanc gets a good 'ole sunburn on day one of Montreal's two-day Osheaga festival..

Unfortunately, due to a 12-hour drive from Halifax to Montreal, Saturday started a little late. Doors to the festival opened at 1pm with bands starting at two (we arrived around four). It was 35 degrees, sunny and humid at Parc Jean Drapeau that day. A perfect setting for drunken fools to dehydrate themselves and pass out. 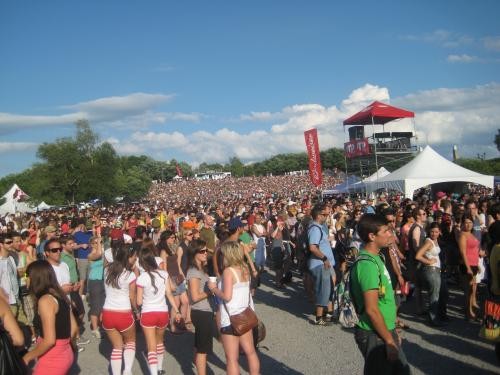 We arrived just in time to see the last half of Toronto’s Gentleman Reg’s half-hour set at the Kia stage (there were two large stages and two smaller stages through trails in the woods). Reg, who you may recognize as the albino in Shortbus, charmed the crowd with his sincerity, giving shout outs to Lykke Li who he was excited to see. He finished his set and got the crowd singing along with his single “Boyfriend.” 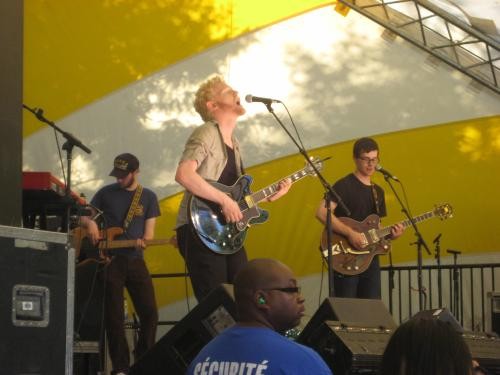 We quickly moved on to Manchester alt-rockers, Elbow, on one of the main stages. Lead singer Guy Garvey dedicated a song to gophers, as he had just seen his first one earlier that day. “This song is about falling in love,” he explains.

We drifted over to watch The Stills rock the Meg stage. Contrary to what I had been told, they were great live. The obvious crowd favorites were songs from their first album, Logic Will Break Your Heart. 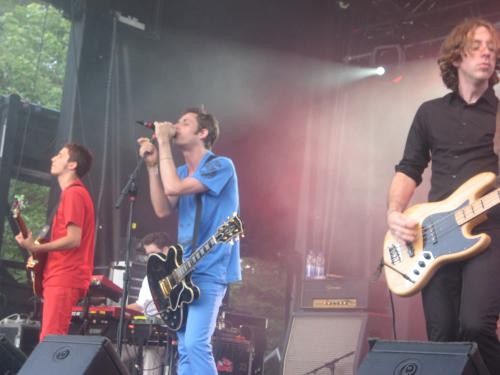 By the end of The Stills’ set, we were about to pass out from sunstroke. People wearing Coldplay t-shirts surrounded us as we sat to dip our feet in the little bit of water flowing in the park. Water bottles empty, we decided not to wait in the 100-person line for free water and paid $4.75 for a bottle of Dasani (that’s nothing compared to the $10 burrito). 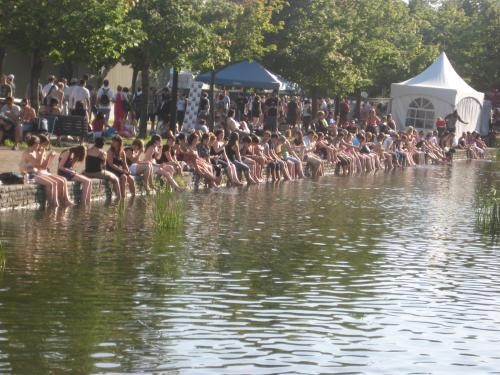 We made our way over to catch a bit of the Rural Alberta Advantagebefore they finished up their set. I was really drawn to this Toronto bands live presence and found them really entertaining to watch but some dude in the audience didn’t think so. He was sitting on the step of the elevated platform reading a sci-fi book…

We hung out for a bit in the shade before strolling back to the Meg stage, excited to see Sweden’s Lykke Li. One of my favorite quotes from a random girl during the 20-minute soundcheck: “I had a hot three-day fling with a guy from Norway who looks a lot like the guitarist”. The crowd got anxious while waiting for the music to start but everyone would agree that it was well worth the wait. Lykke was hands down a highlight of the day performing songs from her debut album Youth Novels release just last year. She bounced around the stage with a black, feathered boa and drumsticks in her hand banging the drums whenever she felt necessary. She threw in a couple of awesome/hilarious covers to get the crowd going such as Lil Wayne’s “A Milli” and A Tribe Called Quest’s “Can I Kick It”.

The day finally cooled down when a huge cloud rolled over Montreal. It was a good cloud though, people cheered for it. Throughout the day we saw four people pass out, one of which was in a Porta Pottie. Gross.

Coldplay took the stage at 9:15. People started running toward the stage upon hearing the opening chords of “Life in Technicolor” off their latest album Viva La Vida. They played all their singles including “Yellow,” “Talk,” “Clocks” and a few songs off their newest album. Mid-way through their set, the band magically appeared on a hidden stage in the middle of the crowd, coincidentally next to where I was standing. Yes, I lost my mind. They performed “Green Eyes,” as well as an acoustic cover of M.J’s “Billie Jean.” Closing with “Fix You” as giant fireworks went off over the island and paper butterflies scattered through the air, it was easily one of the best shows I have ever seen.

Once the show was over, we tried to get to a subway station to make our way home, but since 20,000+ people were trying to do the same, we ended up walking across Pont Jacques Cartier. Oh, and don’t forget the 20-minute wait for an overflowing Porta Pottie. Fun? Not so much.

Check out some footage from day one (don't mind the horrifically low video quality...)