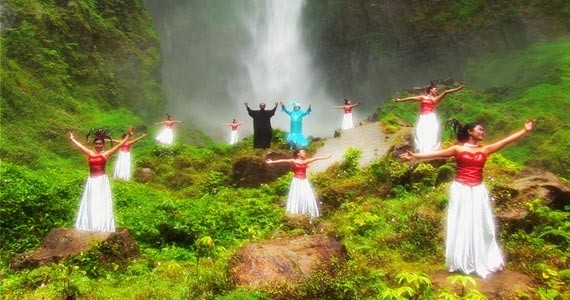 Chris Sullivan and his colleagues took 15 years to finish his animated epic Consuming Spirits. Of the painstakingly deliberate process required to make it, he says, "It's actually a little more pleasant than it looks, but not as pleasant as many things."

His ambivalent assessment applies to the film as well, a queasy and dense amalgam of animation styles---cutout, collage, pencil drawings and stop-motion---a tale of three mysterious and lonely characters in a haunted American small-town. It's grim and gothic, spiked by morbid humour.

"I was often, and repeatedly, discouraged," says Sullivan, a Chicago native who also teaches animation, about the amount of time it took to make his film. "I did normal things in my life, too; no piece of art is going to pay you back from disconnecting from other human beings. But there were parts of the film where I really felt it was working---somehow I knew if I could get my act together to gather it up in the right way, there might just be a film here."

There is a film here, and now we get to see it. Consuming Spirits is one of a dozen out-there cinematic concoctions showing at the Outlier Film Festival, running at the Bus Stop November 21-24. They include the Canadian premiere of Giulio Paradisi's 1979 sci-fi oddity The Visitor, the Mexican zombie picture Halley, the part-fiction/part-documentary creeper Toad Road and a sewer-set body horror, starring Hobo With A Shotgun's Molly Dunsworth, called Septic Man.

The fest is the brainchild of a group of friends in the Halifax film, music and design community---including Seth Smith, James Gauvreau, Nancy Urich, Darcy Spidle, Sandi Rankaduwa, Meg Yoshida and Matt Charlton. "We just saw the model presented by genre festivals like Dark Bridges in Saskatoon, Fantasia in Montreal and Fantastic Fest in Austin," says Charlton. "The movies they were showing were incredible, so when we started Outlier we envisioned a similar program of horror, science fiction, animation and documentary, but we've had to change it. This is a little different---it's niche and focused in a strange, left-of-centre way, but it's harder to define."

Perhaps the most high-profile film at the festival is The Act of Killing, a doc from Joshua Oppenheimer and Christine Cynn. The film allows former Indonesian death squad leaders---who killed thousands in the 1960s after the government was overthrown in a military coup---to tell their own stories, visiting the sites where they tortured and murdered people. They also create bizarre reenactments, adopting styles from Hollywood movies; westerns, gangster dramas and musicals. History is, indeed, written by the winners, and these are those guys. The doc becomes no less than a primer on humanity's capacity for evil. This is the heart of darkness.

If bleak and brooding animations, horror flicks or a doc about the legacy of murder sound a little intimidating to you, Charlton recommends another film at Outlier. It's called The Final Member, a documentary about the Icelandic Penis Museum. The museum displays a penis from every species of mammal, but is missing a human representative. The curator finds two donors: a 90-year-old Icelandic man and a 45-year-old American who's so desperate to get into the museum he's willing to chop off his gear and ship it over.

"The concept is crazy," says Charlton. "But the characters are so compelling it's not long before a penis museum sounds like the most normal thing in the world."