A 1970s mobile home and property chock-full of family history come together to provide a place for simultaneous growth and reflection. 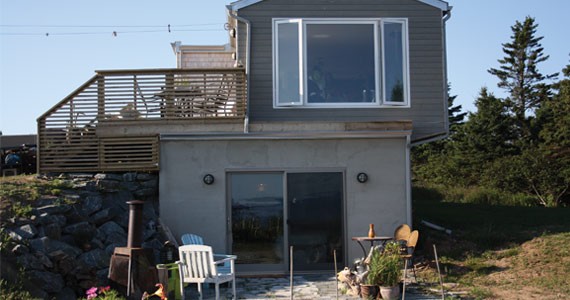 The past is very present on Suzanne Taker and Sheryl Grant's dreamy Seaforth property. Flanked by ocean and trees, the land that that was once Taker's grandfather's farm has been in her family for nearly 60 years, making it just as rich historically as it is aesthetically. A few years ago the only structure that stood on the parcel was a 1970s tin-can of a mobile home---which Taker had gutted herself---but instead of starting from scratch, its bare bones were a jumping- off point for a project that resulted in the pair's personal sanctuary.

"Who knew a 30-year-old mobile home could be so exciting?" laughs intern architect Judy Obersi, who worked closely with friend and fellow architect Jane Abbott to design the home which, to the naked eye, looks nothing like a house on wheels. Steering clear of the traditional, Taker and Grant's reno saw the trailer lifted and then re-placed, in its original spot, as a second storey on top of a newly poured foundation.

"They could have easily taken it away and built something new, but the emotional attachment was huge," Obersi says of the vintage trailer. With the skeleton of that old mobile as the inspiration for the new home's structure, and the nearby hiking trail's bridges and boardwalks looming in the distance, the metaphor of bridging old and new was right before her eyes.

"I wouldn't care what was here, the view is just amazing...it feels like you're on a houseboat," says Taker. "It looks bigger than it is because your eyes see so far." The house was designed taking the immense landscape into consideration. "Because I lived in the original trailer I had an idea of where I wanted things to be. For example, we get the most amazing sunsets, so I wanted a window that allowed me to see a sunset as I was cooking, so my stove and prep area faces that direction." The house was also designed so that she could see the water from her bedroom, which opens up to a small patio, perfect for mellow morning coffees.

Working on a budget, Taker and Grant were frugal when it came to outfitting the home, making thoughtful decisions when it came to purchasing materials---like finding stone on Kijiji and using plexiglass instead of glass for their railings. They also repurposed anything they could, bringing the outdoors inside through using details like driftwood and salvaged railway ties as decor and creating a bathroom vanity out of a 1950s sideboard.

Now, the pair refer to their Seaport home as Sankofa, referencing an African philosophy that means, "Reclaim your past so you may move forward."

"This place holds special meaning for us as it allows us to reclaim so many things we've forgotten like how to slow down, how to play, how to grow your own food, how to explore and enjoy nature," says Taker. "Living in this manner allows us to move forward and live in happiness and in health."