Halifax’s writing community is bustling and vibrant. Shannon Webb-Campbell sketches a look at what you can expect this fall. 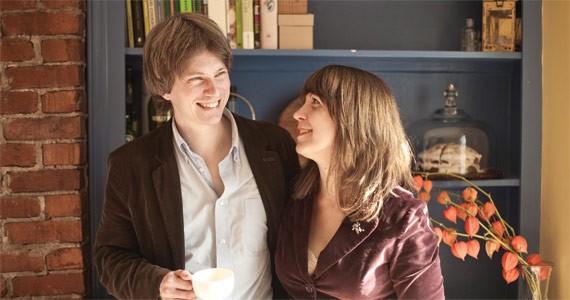 Writing and life are inextricably linked. Often, one gets in the way of the other. There are times to write, others to live.

Novelist and Dalhousie instructor Heather Jessup and her partner, poet and King's teaching fellow Warren Heiti, know this. Both have books coming out this fall, educate and keep a kitchen that always seems to smell like freshly baked goods and an oversized pot of tea steeping in their kitchen.

Two writers, one relationship. The secret? No internet at home.

"We only have our five senses and our hearts and minds," says Jessup, whose novel The Lightning Field comes out this fall with Gaspereau Press. "This is what we are given as humans to digest the intricacies of the world."

In Jessup's richly imaginative world, her digestive tract breaks down flaky Saturday morning croissants, sad accordion music on the street, an impression on the bedspread her lover left behind after pulling up his socks that morning.

"We only get one chance at this life. We only get one day at a time. I write to try to remember this," she says. "I write to, as much as possible, fully attend to each rich moment that I am lucky enough to have on this earth."

Her writing practice, much like her presence is genuine, filled with wisdom and thought. Doe-eyed and free-spirited, Jessup soaks in the moment. Her laugh and sense of wonder are infectious.

"This attending and appreciating is a task that I endlessly fall short of, but trying to find the words for things unspeakable helps. It helps keep me in attendance to life."

Set in Cold War-era Toronto, The Lightning Field explores loss and the unexpected. The title alludes to the electrical connections and outcomes of various characters interconnected in the novel. Protagonist Lucy Jacobs is struck by lightning in a field on the outskirts of the city, while the Avro Arrow has its first roll-out flight nearby.

"The plane led me to this era. But the kitschy details of Howdy Doody egg timers and pleated '50s housewife skirts enthralled," she says. "Think Mad Men meets Toronto suburbs and early aerospace development. How could I not be intrigued?"

"The title, Hydrologos, means 'water-logos' but what does logos mean?" says Heiti. "It's an ancient Greek word, with numerous connotations, not easy to translate. The Presocratic philosopher Herakleitos uses it to mean something like resonant structure."

"He thought and wrote about the natural world, and I was particularly interested in the role of water in his philosophy," he says. "I called this translation exercise 'hydrologos,' and that name eventually seemed appropriate for my long poem."

Heiti finds himself drawn to poetry responsive to the world, a conversation prior to language. Less writing, more witnessing and listening. While Jessup ponders winsomeness, Heiti contemplates "feathers of the fennel," the "gnarled and warty cucumber" in the garden, the "knavish jay of a blue vest," the "joyous symbiosis" of the bicycle, the "unplugged percussion of carpentry," or the "jarring discord" of a factory.

In a nutshell, one mind compliments the other. Officially, their joint book launch is listed for December 6, part of Saint Mary's Atrium Reading Series, hosted by poet and professor Brian Bartlett.

Between now and then, Jessup makes many pitstops across Canada, including visits to Gabriola Island (where CBC's Shelagh Rogers is rumoured to be taping), Toronto's International Festival of Authors, at Montreal's Drawn and Quarterly and Vancouver's International Writers' Festival.

Locally, Corey Mombourquette's Lilah Kemp Reading Series, gets a makeover as Lilah Kemp Reading Series Presents: Playhouse! "Playhouse will essentially be a different version of what I've been doing for the last eight months," says Mombourquette. "Every session will feature three literary readings and will include either a musical performance, a scene from a play, or a comedy sketch."

Similar to Allan Street, he wants to find a house with space to transform into an arts venue to run this monthly arts event from January to June 2012.

"Lilah Kemp is gaining momentum because I have been fortunate enough to have incredibly talented people participate so far," he says. "The Halifax art scene is very fragmented, so it's important to keep things like this active for as long as possible."

For bookies who can't wait until next year, Blowhard Presents offers a "bi-monthly-ish night of storytelling and performance based on a theme." Curated by Jackie Torrens, Andrea Dorfman, Tara Doyle and Stephanie Domet, Blowhard Presents happens at FRED. An event is promised before Christmas. Domet also runs an occasional reading series called Porkpie with Coast copy chief Tara Thorne at The Company House.

In true DIY fashion, Anna Quon, author of Migration Songs (published by Halifax/Toronto-based Invisible Publishing), will be selling her homemade zines at the Dartmouth Farmers' Market October 1 and 15.

"I love making zines," says Quon. "I love the whole thing---gathering the writing, designing and laying out the book---not that my design skills are great, I'm definitely lacking in that area. But I like putting it together."

Over the past eight years Quon has created zines, including Mental Illness Poems; Maurice; an illustrated story; Wallet Poetry, a teeny-tiny zine of poems about writing poetry; small packets of business card-sized poems for each month; a drawing called A Year in Haiku; Half Empty, a collaborative zine with her brother Andrew and her very first poetry zine, Poems for 4 Seasons.

The Writers' Federation of Nova Scotia's is a hub for the local writing community. The membership-based organization offers workshops, a writers-in-schools program, the Atlantic writing competition and an annual mentorship program. Executive director Nate Crawford says if they employed a cheesy corporate mantra it would be something along the lines of "we help writers help themselves."

As so much of writing is solitary, Crawford notes the key benefits of the WFNS is a sense of kinship.

"The intangible yet invaluable benefit is community," he says. "In such an isolating line of work, being able to connect with other writers and bounce around ideas, woes and inspirations can make a world of difference."

Guru-in-residence Sue Goyette, poet and Dalhousie instructor, gathers market and professional information in a weekly e-newsletter. If knowing about the calls for submissions, writers in residence positions or literary events isn't enough, her peculiar Notes From The Fed musings are worth the $45 membership fee alone ($20 for students). Her latest collection, Outskirts, honours our city. "Halifax influences my writing in a lot of ways. Geographically, being so close to the Atlantic keeps me humble. It's a vast reminder of wilderness and how little control we have over things," says Goyette. "I like keeping my end of that dialogue going and that often presents itself as poetry.

"I consider my community in Halifax vibrant and audacious. They ride bikes and eat locally. They listen to good music and dance. They get together and rile each other up. And they take the time for each other. I'm a poet in this community and so try to give voice to the things I think bear repeating, or slowing down, or set surrounded by silence."

Author Ami McKay, who prefers the solitary quiet life of Scot's Bay, worked on earlier drafts of her best-selling novel The Birth House under the guidance of the WFNS mentorship program. Her latest, The Virgin Cure, will be released in October.

Based on research and the life of her great-great grandmother, Dr. Sarah Fonda Mackintosh, The Virgin Cure explores the life of one of the first female physicians in New York City, who practiced medicine on the Lower East Side in the 1870s and worked primarily with at-risk women and youth.

McKay, who writes every day after breakfast, finds setting aside a particular time for writing crucial to her practice. "I'll write for a few hours and then break to reconnect with my family," she says. "If there's time left after dinner, I'll go back to it again and at the very least plan where to begin the next day. Showing up at my desk and being consistent is the most important part of my writing practice. If I waited for the muse to appear, I'd never get a word on the page."

Shannon Webb-Campbell is working on a short story collection. It's about firsts, death, love and loss.

Fall Arts Preview: Get lit(-erary) with these events