Carrey has moments, but otherwise not much to see here 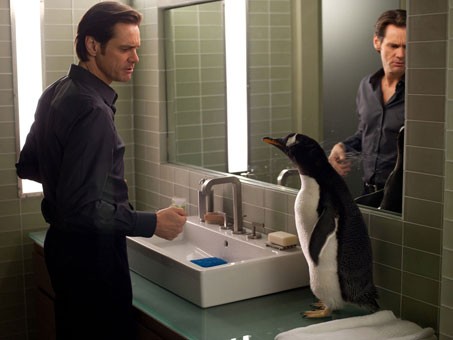 Jim Carrey does his best impression of a manic businessman turned penguin-hoarder for an hour and a half. Mike Waters (Ghosts of Girlfriends Past) alters a classic children’s novel beyond recognition: As Mr. Popper, Carrey winterizes his swanky Manhattan apartment for Antarctic waterfowl bequeathed to him by his absentee father, attempts to reignite a broken-up marriage and wins over his two estranged children. Poop-squirting birds help his cause, of course. Old-school rubber-face Carrey shines through a few times in a pared-down incarnation and when he does it’s genuinely funny, making the movie tolerable---he even whips out a Jimmy Stewart impersonation. The rest of the cast is inconsequential and without Carrey the entire movie would be too, but not even a menagerie can revive his Ace Ventura glory days.