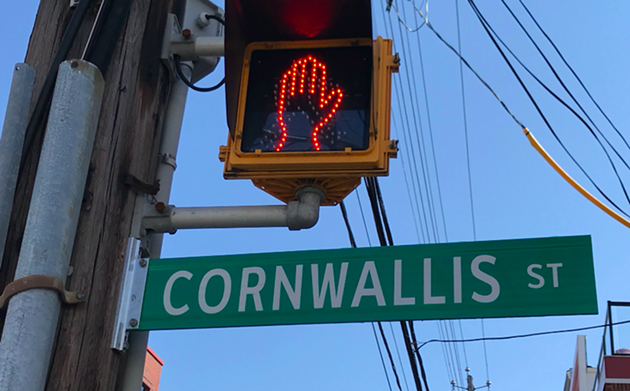 “The statue coming down was a great first step, but there's more that can be done,”   says Angel Marcus-Panag.

On Thursday, the Halifax resident went to City Hall and delivered his petition containing over 1,700 signatures in favour of renaming Cornwallis Street to Rocky Jones Boulevard.

The vast majority of those names come from an online Change.org petition that Marcus-Panag created several months ago. Along with those names are 56 signatures from people who live, work or own property on the seven-block street.

“Most people, after speaking with them, signed the petition,” Marcus-Panag says. “Everyone was fine with it.”

It's the latest effort in what's been an increasing desire from the public to re-examine how Halifax honours its founder, Edward Cornwallis.

The first governor of Nova Scotia has become more well-known over the past several years for the treaties he broke and violent actions he ordered against the area's indigenous population, including an infamous 1749 bounty on Mi'kmaq scalps.

In 2011, public outcry caused the Halifax Regional School Board to change the name of Cornwallis Junior High. Earlier this year, the Cornwallis Street Baptist Church also changed its name to New Horizons, in order to better reflect the church's values and its solidarity with the local Indigenous community.

Back in January, HRM removed a bronze statue of Cornwallis and put it into storage, awaiting a verdict from an expert advisory panel on what Halifax should do about its problematic founder’s legacy.

But Cornwallis’ name still adorns the south-end park where his statue once stood, and the north-end street running between North Park and Barrington.

A lot of Marcus-Panag's life has centred around that rapidly gentrifying area, he says. Rocky Jones was also his mentor when Marcus-Panag first started university. The legendary human rights activist was a founding member of the National Black Coalition of Canada, the Black United Front of Nova Scotia and Dalhousie’s University’s Transition Year Program. He and his wife Joan worked tirelessly for decades in support of African Nova Scotians, the Mi'kmaq community and for the rights of prison inmates.

Marcus-Panag started thinking about this project after Jones’ death in 2013, realizing the community pillar deserved some concrete recognition for the neighbourhood he helped support.

The petition, he says, is just as much about honouring Jones as it is about taking off the Cornwallis name.

Halifax's charter grants council the authority to name and rename any street or private road, though, given the inconvenience on area residents, the process isn't usually undertaken without widespread public support from property owners.

With all the names on his petition, however, Marcus-Panag is hopeful that area-councillor Lindell Smith will get the ball rolling with a motion to rename what could soon become the former Cornwallis Street.

“I think it's important for the younger generation growing up to see someone positive and for a lot of the African Nova Scotian and Indigenous people who live in this city to feel that they're welcome in this city too,” he says.

“There's a long history of being not treated as an equal. I think it's important to change that.”