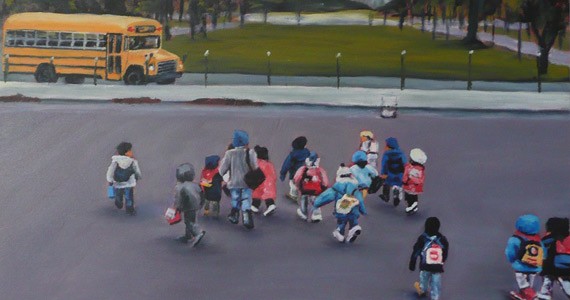 Imagine if memories were something that could be picked up in a thrift shop, like a hard-to-find record or a pair of vintage earrings. What if you could try a stranger's recollections on for size, to see how they fit? These are the kinds of speculations NSCAD grad Ginevra Syperek plays with in Purchased Memories, a series of oil paintings opening Thursday at the Hydrostone Gallery.

While working in New York City, Syperek made regular trips to junk stores and began collecting old photographs. Though she normally prefers to paint from life, she was struck by some of these photos and decided that their lives shouldn't end in a drawer or a shoebox. She reflects on the reasons the photos end up in stores: Someone dies, moves or simply decides to throw them away. "It's like this is an end to one chapter of their story, and maybe it picks up again somewhere else."

The photos Syperek was inspired to paint aren't linked by any particular theme or time period. Some subjects reappear, though, like the Where's Waldo-type character who popped up over multiple visits to one store. "I kept finding him," Syperek says, showing me a handful of shots of a man on various vacations, posing in front of attractions, his hair greyer in some photos than others. The paintings featuring him are smaller than most of the others, done on 5"x7" canvas. "I wanted to keep the feel of a snapshot, or a postcard," Syperek explains.

In fact, all of the paintings strive to stay true to the image they came from. While Syperek occasionally alters small aspects of the original, omitting a background or removing polka dots from a dress, for the most part she steps out of the way. "The photos themselves are the subject," she says. Syperek doesn't impose her own narratives or explanations onto the images, either, often titling them whatever was scrawled on the back of the photo. For example, a woman kneeling with a blowtorch is simply "June, 1979." "I didn't want to say more than necessary. I wanted to leave a lot open to interpretation." She keeps what she found perfect about the photos in the first place: the tutus worn by a group of dancers; a child's shy expression; the blue of a swimming pool; a glint of chrome.

The scenes in the series are diverse, ranging from posed portraits to souvenir and action shots to the mysterious. Try, for example, to figure out what's going on in the black-and-white painting of a group of men, some in suit and tie, and another shirtless, devouring handfuls of linguine.

Removed from their original context, the images invite us to wonder about their stories, along with the characters on both sides of the camera. The photos Syperek worked with are all from a time before digital photography. She notes that sometimes these images hold more substance, especially when flipping through a pile of them. They tend to be more deliberate and thought-out, a care that is reflected in Syperek's meticulous attention to detail.

Syperek, who also enjoys working with jewellery, video, music and sound, went back and forth when trying to come up with a title for her exhibition. "Because I'm using someone else's experience, I originally thought of Stolen Memories, but then I thought, wait, I went out and bought them."

Gathered together, Syperek's paintings recreate the feeling of stumbling on a gem of a junk shop, and uncover some of the disparate treasures buried inside.