Photopolis surrounds the city in photography this October giving you ample opportunity to soak up the film. by Jaime Forsythe. 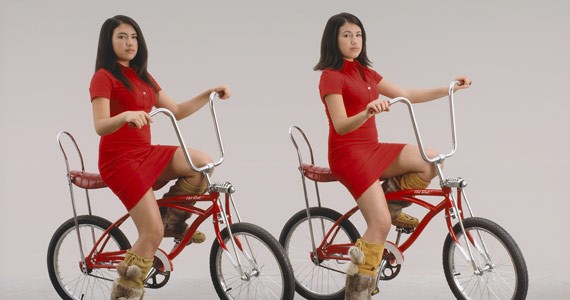 Shutterbugs, and those who love them, won't want to miss this year's Photopolis. The city-wide photography festival runs for the month of October, and is an opportunity to discover work by local, national and international artists in a variety of venues. The exhibits will showcase a full range of photographic technologies: from images captured by a hand-crafted camera to cellphone snaps. Meanwhile, archival meets digital in the collection of nitrate negatives of travel scenes from the 1870s to the 1950s that the Nova Scotia Archives will be uploading to Flickr.

The festival also offers a day-long symposium on October 22, at the Halifax Marriott Harbourfront Hotel. Presentations and panel discussions explore contemporary issues and practical realities, including "Life As A Photographer," "Exhibiting Photography in Canada," "Perspectives on Photo Book Publishing" and "The Fine Art Print: Issues of Multiplicity, Uniqueness, and Presentation."

Photographer Lisette Model (1901-1983) is remembered for her close-up portraits of the wealthy and the eccentric, her anonymous "hit and run" shooting method, and her mysterious public persona. Model "was an original, and a unique figure in photographic history," says George Steeves, curator of Lisette Model: A Performance in Photography, which runs from October 8 to November 20 at the Mount Saint Vincent University Art Gallery. "She made herself more so by her inveterate manipulations of her personal mythology. She's extremely hard to figure out."

Model had a privileged childhood in Vienna, complete with mansion and governess. She studied piano, violin and voice from an early age. Later, she studied with Arnold Schönberg, one of the pioneers of atonal composition. (In his essay in the exhibition catalogue, Steeves suggests that Schönberg's avant-garde sound would influence aspects of Model's photographic practice). Despite her musical accomplishments, Model abandoned this career at age 32, began to take pictures with a Rolleiflex (a twin-lens reflex camera, with the lenses stacked on top of one another) and quickly gained respect as a talented street photographer. Some of her well-known works include Coney Island Bather, candid shots of a voluptuous woman in a bathing suit crouching exuberantly for the camera, and the series Running Legs, photographs of the rushing feet of busy New Yorkers.

Steeves has selected 22 prints from the Model collection at the National Gallery of Canada. He emphasizes that Model's photographs go beyond simply documenting what was in front of her; her images are realistic, but they are also transformed by Model's particular gaze. "What was there for all to see is rendered in her 'hall of mirrors' vision as a world apart, neither documentary nor surreal." After age 55, although Model was still often seen with a camera, she stopped developing photos. "Photography is an intensely consuming practice; it uses up the soul," Steeves notes. "The photographer 'takes' pictures and the pictures subtract something away from the photographer. In Lisette's case, I sometimes think that her early stardom lead to overarching expectations. Perhaps by age 55 she had said all she had to say."

In Steeling the Gaze: Portraits by Aboriginal Artists at the Dalhousie Art Gallery (October 14-November 27), the portrait becomes a tool of cultural self-determination for the featured twelve Aboriginal artists.

"Portraiture and Aboriginal peoples have a long and problematic history," explains Steven Loft, co-curator with Andrea Kunard. "The portrait by its nature is a personal and intimate act. It speaks to vulnerability and courage, to our fear of age and mortality and to our innate desire for recognition, acceptance and even adoration."

The artists in this collection use portraits to confront, respond to or poke fun at representations of Aboriginal peoples which have historically been simplistic or inaccurate. "For Aboriginal peoples, the portrait has been a device, the imagery of the Aboriginal not only misrepresented, it was a calculated tool of colonization," Loft says. "But what happens when you take back the image, the portrayal and the perception? What happens when Aboriginal artists turn the gaze to their own communities, their own families, and themselves?" Steeling the Gaze is proof that the answers to these questions are nuanced and encompass multiple perspectives.

At quick glance, KC Adams' Cyborg Hybrids might appear pulled from a fashion magazine; a closer look challenges the viewer to classify the identities of the (digitally altered) subjects. The stoic poses Adams uses mock the portraits of Aboriginal peoples from the 19th and early 20th century.

Stereotypical depictions of Aboriginal peoples and communities haven't disappeared, and Steeling the Gaze addresses this fact. Jeff Thomas photographs his son, Bear, in the urban landscape to record "symbols of Indian-ness," as in the photo "Bear at Champlain Monument, Ottawa." Bear is also an artist, under the name Bear Witness, and his video work BrokeDickDog dissects the myth of the "Indian warrior" created by Hollywood. In the same vein, the title Steeling the Gaze is meant to riff on the "steely gaze" a cowboy or hero in a Western film might be said to have. With the title, "we kind of subvert the white Hollywood gaze," Loft says, "so it's a fun, subversive, playful title"---much like the images themselves.