Why the NSLC has craft brewers hopping mad. 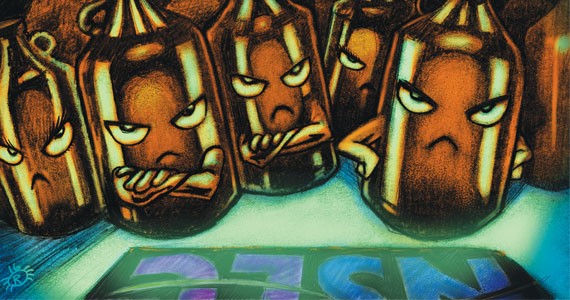 Frustration is brewing amongst craft beer makers about "Prohibition-era-esque" regulations many say are stifling the industry. While some have issued calls to arms against liquor bureaucracy, others feel they can't afford to be brash—because the system they're taking on is their biggest customer.

In a short period of time, Nova Scotia's craft beer has evolved from a pint-sized category to a shelf staple. The industry grew by 25.5 percent to $7.6 million in 2015-2016, according to the Nova Scotia Liquor Corporation's latest year-end report. With 35 microbreweries and counting, homegrown craft now accounts for four percent of all beer sold in the province.

But breaking into the booze business comes at a price: Craft breweries pay 50 cents per litre to the NSLC for beer sold on-site directly to customers. After paying the NSLC hundreds of thousands of dollars for selling growlers in their own stores, craft brewers and bars are saying the party's over.

In August, Unfiltered Brewing filed a lawsuit against the NSLC over the mark-up fee, calling it an "unconstitutional tax." The north end brewery asked for a court order requiring the NSLC to return all money collected from Unfiltered under the policy, which runs the company around $2,400 per month on average.

NSLC spokesperson Denise Corra declined to comment while the case is before the courts. She says the mark-up fee on craft beer sales, known as the Retail Mark-Up Sales Allocation, added up to $915,875 in revenue for the NSLC in the last fiscal year. Corra adds the NSLC supports local breweries by promoting their products and giving $50,000 to the craft brewers' association.

She says the craft industry has grown by "leaps and bounds" in less than a decade and it's been hard for regulations to keep pace.

"You can't create the sort of blueprints for economic change in Nova Scotia that we all believe is possible...by responding too slow to needs," Jeremy White of Big Spruce Brewing says. "Let's get with modern times and do this properly."

Last week in a widely shared 10-point open letter, White enumerated his concerns about the "Prohibition-era-esque" regulations that are keeping the industry from reaching its full potential, including serving size restrictions that force his taproom to go through four times as many dishes necessary.

It seems that the tipping point for the craft community may have come this spring, after conversations with officials led some brewers to believe that rule changes would be included in this year's provincial budget. When the budget was released and the regulatory regime remained unscathed, White says he felt like "we had been left at the altar."

Finance minister Randy Delorey says members of his department consulted with craft brewers for input on the budget, but the province still needs to evaluate possible "unintended consequences" of fiddling with the regulations before any changes can be approved.

"The system that's in place now is allowing for quite rapid success," Delorey says. "The fact that the growth is happening in a relatively short period of time is more reason we have to ensure that any changes we are making don't have negative impacts, especially for a restricted substance."

In the midst of this clash is Boxing Rock Brewing owner Emily Tipton. As president of Nova Scotia's craft brewing association, she sees her members struggling to keep up with consumer demand. "We end up with empty shelf spots," she says. But Tipton has to tread lightly. As both a business owner and representative of her industry, she has to maintain a working rapport with NSLC. Like many craft brewers in the province, Tipton's biggest client is also her regulator—the NSLC.

"It's just like we're invisible," she says. "If the NSLC were supporting local industry and helping us move these changes forward instead of standing in the way of them, I think we would have made a lot more progress by now."

This is the fear all liquor businesses live under, says Stillwell co-owner Chris Reynolds. The province giveth, and the province taketh away. The bar serves mostly local beer, but wants to challenge its patrons' palates with brews beyond Nova Scotia. The penalty tax on out-of-province kegs is so high, Reynolds can barely afford to turn on the tap.

"We're living under the thumb of a provincial liquor monopoly that is basically just on the side of the highway with its arms crossed fleecing us for money," he says. "The government is our total master."