Pledge allegiance to The Sorority

The Toronto hip hop group is here to fill your head with hooks, not your female quota. 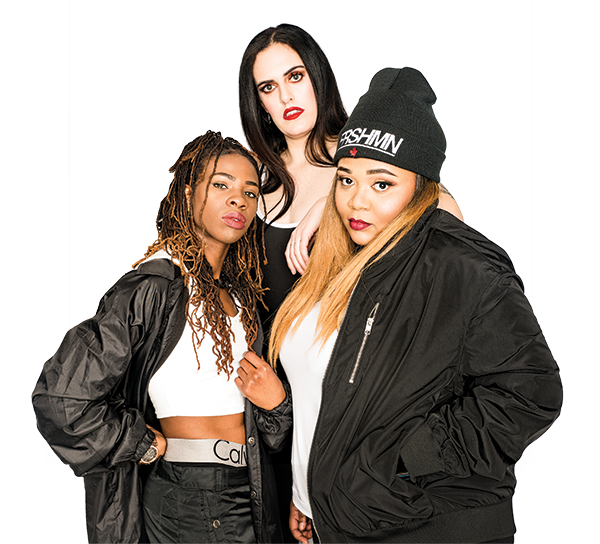 Though only a group since 2016, the story of hip hop outfit The Sorority has reached origin myth status: Four rappers—all seasoned solo acts—meet and perform together as part of an International Women's Day cypher. The chemistry is palpable. The performance goes viral. pHoenix Pagliacci, Keysha Freshh, Lex Leosis and Haviah Mighty leave as a sisterhood after arriving as acquaintances.

"The cypher is kinda infamous now. There was tons of people online that were like 'Who's this group? We really wanna hear from them again!' and that was kinda how we decided to become a group," says Alexandria Leousis (AKA Lex Leosis) says, as the phone line fills with supportive "mhmms" from Keysha Fanfair (AKA Freshh) and Mighty.

It's enough to feel like it's a full-circle moment, then, seeing The Sorority play a show in Halifax this Friday night for International Women's Day. And while the group's roots will always be tied to March 8, a neat bow atop its story is not the reason to head to Reflections. Rather, it's because theirs is a type of hip hop so lyrical, so visceral, it hits your eardrum with the goosebump-inducing force of a sour candy making contact with your tongue: Each line offers intensity quickly chased by relief, as deftly woven rhymes rise like scaffolding above sleek, minimal beats.

"I think that it's really important that we stop boxing ourselves in and also for media, journalists, to take on the responsibility of not boxing us in by our gender, because there's no reason for a sub-category or a consolation prize for being a female," says Fanfair. "There shouldn't be a 'wow' factor that this gender is taking up this sacred, men's-only extracurricular activity. It isn't something that should even have to be said: We are women, but we are rappers first—that's our job, that's what we love to do, we compete on the same playing field. I think the whole female MC thing is ridiculous—we're MCs, full stop."

The Sorority's 10-track debut, Pledge, backs up these intentions, with verses that oscillate between hat-tips to Missy Elliot and the Greek legend of Icarus, supported by smatterings of dancehall and an obvious group appreciation for R&B.

"One thing about working with The Sorority is you usually only get one verse, so it has to be an amazing verse. And I know Keysha and Haviah are always gonna write great lyrics and their flows are gonna be impeccable and their ideas are gonna be great and so I have to bring my very best work to the table at all times," says Leousis. "And, if that means I have to rewrite it 300 times—which, sometimes that happens—then I will. It really is almost like a training camp: You go to work and you don't come out until it's your best stuff."

The group's biggest hit is the album-opening "SRTY," a feel-good bop with the energy of CrazySexyCool-era TLC. "That's like an anthem—every good hip hop album needs an anthem," says Fanfair. The entire record is "sonically good—and that's not just me being biased. Like 'Midnight:' Haviah wrote the hook on that, the song is straight bars. I like the 'wow' factor that our fans get. In Halifax, that's the song we'll come out to and the reaction that we get to that song is just beautiful to me."

They promise tighter-than-ever choreography and add that more of their authentic banter will fill the Friday performance—a sunny side-effect of reworking the set after the recent departure of former member pHoenix Pagliacci. (If you're looking for the tea on Pagliacci's exit, there's none to be found. Fanfair is quick to say that each member of the group still has a healthy solo career, adding: "The Sorority was always about more than just this group. It's bigger than all of us.")

Shows like the one in Halifax are, in Mighty's view, "important as they exist, and they have not [existed] at all in past realms. [But] I'd really like to stress the importance of implementing women-only or women-focused things into regular programming—I think that's the next step."

A microwave beeps in the background, and the awkwardness causes Leousis and Mighty to unsuccessfully suppress giggles. Silence swallows the group for a beat as each contemplates a new question: Which Sorority song is their favourite? "I have two which are my favourites. But actually, I'm interested: Lex, Haviah, can you guess what they are?" Fanfair says. A rapid-fire round table ensues, and even though each guess comes with a solid case, most are off the mark: "Keysha's favourite has to be 'On Me' because of her dancehall influence" Mighty says.

"Actually, mine are 'Wildin' and 'Midnight,'" Fanfair replies. Laughter and audible gasps crowd the call as the guessing continues. (For the record, all are fans of the sex-positive, Lil' Kim energy of 'Wildin.')

In a genre that has a simultaneously rich and also suppressed history of women's voices (yes, badass lady-rappers have been there since the jump, often living on the edges of airplay and mainstream success), hearing three strong female leads share genuine laughs and friendship comes as a rich, caramel-sweet surprise.

"Based on my opinion and also just numbers, it's true that there was more female MCs in the '90s that you could look up to that did different things," says Fanfair. "And it feels like as the 2000s came in, they started to fizzle out and it was a time where there was just one, and like, now there's two but they gotta be against each other. Or, OK, there's three but they all gotta hate each other, you know? If we're not pinned against each other there's no room for us: That's how the industry is trying to paint this image."

It feels like a veiled comment on the Cardi B-Nicki Minaj rivalry, but could just as easily have been said 20 years ago about Foxy Brown and Lil' Kim.

The conversation winds onwards and the three's diverse influences mount. "That's the reason why we can get into different spaces, different households—because if you don't resonate with my style, then maybe [you will] with Keisha or Haviah's," Leousis says. "I think that's really important that one group could offer so many dynamics to a record."

A vision of excellence plays out in this mix of deliveries and styles: Mighty grew up steeped in reggae but has become an expert on the sounds of Toronto's hip hop scene. Leousis, a hip hop scholar, knows verses by heart from rappers you've never heard of. Fanfair's Spotify history spans R&B, soca and '90s golden-era rap. "The group THEY. is really good," Leousis adds as part of a breathy list of acts she idolizes. "Oh THEY. are sick!" Mighty yells in agreement.

Fanfair pauses before summing it all up: "I feel like with The Sorority, it's three really powerful MCs who bring something different. Like, when you ask people to describe The Sorority, one thing that they always say is each person brings something different to create this machine and that's what is so unique about it and that's what makes the music great, the stage shows great. Everybody has their own style and no one's trying to conform. That's what solidifies what we're doing and separates us from what others are." a

Morgan Mullin is listings editor at The Coast. She loves a good leopard print, an all-girl band of any genre and and having cake for breakfast.