Pokemon Go out and discover this city

Three easy tours to level up your local knowledge and your trainer, all at the same time.

If you’re not careful, you’ll spend the whole school year living in a bubble. A good campus—and Halifax is loaded with ’em—is a socially fluid haven. There are places to eat, work out, even sleep if you go the dorm route (or have a sleeping bag stuffed in that backpack). Schools hope you never leave, that you think they’re the centre of the universe, so you carry that belief into your long, distinguished career as an alumni donor.

Great for your alma mater, bad for you. Because as long as you’re thinking campus is as good as it gets, you’re missing out on a wonderful small city, where the people are so easygoing it’s nearly as social as undergrad, and the food’s way better than anything you can get on campus. Plus it’s a hotbed for Pokemon Go. In other words, no matter how little interest you have in being part of the social fabric of this town you’re now living in, breaking out of that campus bubble will raise your Pokemon game. 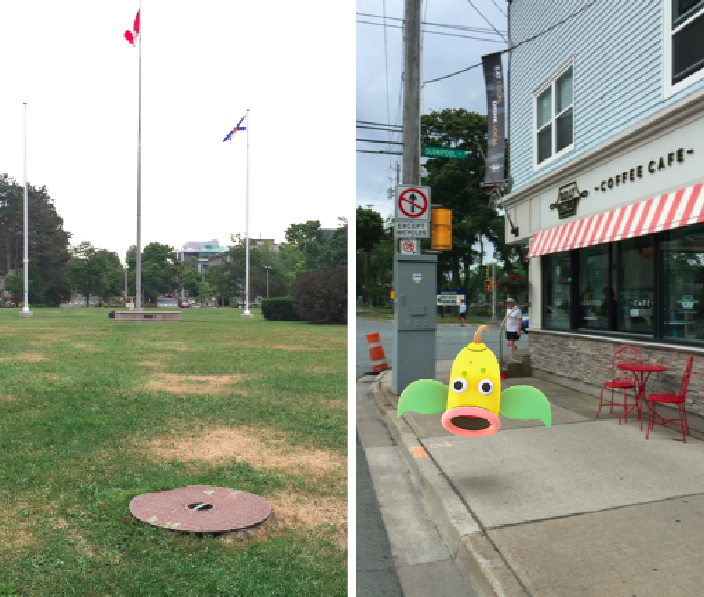 Escape the south end
Go old schools—SMU, Dal and King’s—then get out!

You’re near the southern tip of the peninsula at the centre of sprawling Halifax Regional Municipality. The south end is a privileged enclave of doctors, lawyers, schools and hospitals. Some people never leave it, but you’re not going to be one of them. Facing the Burke Building at SMU, start up Inglis Street to your right, and take a right on Robie Street. A few blocks up, turn left on University Avenue. As you can guess from the Dalhousie University PokeStop—we’ll just call them Stops from now on—this is where Dal is based.

Follow University to its end and beyond, right up onto Dal’s front yard to the sweet spot between four Stops. Linger if they’re lured, as happens a lot, but resist the urge to lift the sewer-like metal covering you may notice: A spurious rumour over the summer said there’s always a Charizard at the bottom of the 10-metre shaft, and a teenager climbing down slipped off the ladder and nearly died.

When it’s time to leave, aim at the William Henry Chase Plaque Stop, then angle left to University of King’s College Stop. Look around. This corner of Dal’s campus is actually King’s College, founded in 1789, Canada’s oldest English university, with roots in the same King’s they sing about in Hamilton. It’s also a major campus bubble. To do a good deed, take some King’s students with you as you leave towards the St. Joseph’s Newman Centre Stop, then turn right up Coburg Road. Just after the hill crests, head left on Vernon Street. The pull of campus will be strong at first, but keep going. When you reach the wonderful Dilly Dally cafe, you’ve arrived. This is Quinpool Road, main street of the west end, loaded with shops, services and Pokemon creatures to enslave. Enjoy your freedom to catch ’em all.

The waterfront is dense with local lore, like the fact shipping magnate Samuel Cunard was a proud native son, who launched his eponymous steamship line in 1840 by sending a boat here from Liverpool, England. And luckily much of that lore is noted with a Stop, making this tour simple: With NSCAD’s superb Port Campus building on your right, start along the water through some of the richest Pokemon terrain in the city. Powering up with ice cream from Sugah! will sustain you for the popular multi-stop Maritime Museum of the Atlantic. Come down gently from the high that is the museum by meandering to Old Dockyard Clock Stop beside the Halifax Ferry Terminal. One day, when you’re ready for a trip off the peninsula, you should take the ferry to Dartmouth, where the Alderney Landing ferry terminal is another Pokemon hotzone.

The big bang
NSCC’s Institute of Technology is awash in history and Pokemon Gyms.

Welcome to the northern part of the peninsula. You can find people your parents’ age who say this is a dangerous area—they’re about as common as Drowzee—although that’s an outdated impression rooted in racism: The north end is not as white-bread as the south end. Then again, few places on the planet are.

From the building and the Stop that is the Institute of Technology, go down Leeds and turn left on Robie Street. Yes, this is the Robie you already know, running the peninsula like Halifax’s Broadway. Battle at the two Gyms in a row, then take a break for some history at the park commemorating the 1917 Halifax Explosion. (Don’t worry, it’s also a Stop.) The explosion flattened swaths of the north end, killed thousands of people and was the largest pre-atomic explosion humans ever caused.

Pep talk over, keep going along Robie until you follow the left-curving road where Lady Hammond Road turns into Duffus Street, then take a right down Isleville Street. The streets on your left make up the Hydrostone district, an area destroyed in the explosion and rebuild out of “hydro-stone” cinderblock—fire prevention then being top-of-mind. Your destination is Young Street, home to the Hydrostone Market, a great set of local restaurants, boutiques and a Starbucks. There’s even a French school, the Alliance Française, if you want to brush up for extra credit. (You can also try eating a croissant from Julien’s Cafe for the same effect.)

The Stops around the market are often lured by people who work nearby, so let their status be your guide to whether you should be browsing shops or hunting creatures. Our final point of interest to many students is Oland Brewery, the large, low building at the corner of Isleville and Young. Behind those unassuming walls is made Alexander Keith’s beer. Next time your phone dies from too much Pokemon, scratch that scavenging itch by looking for Keith’s flags used as curtains in the windows of student houses, and you’ll be a fully levelled-up Haligonian in no time.

Back To School Back to School Pokémon Games