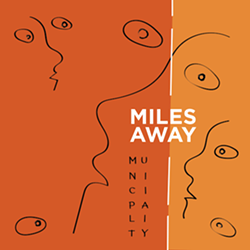 Basically un-Googleable band Municipality premieres a shining new track from upcoming debut album Any Word, out September 1 on Atlanta, Georgia's Human Sounds Records. "It's pretty poppy. We have a lot of our friends involved in some way or other, so to me it has a communal feel," says Peter Fordham, who along with twin brother William and Peter Gillis and Daniel Crowther, make up the band. "Human Sounds Records has an interesting connection to Halifax in that it shouldn't have any connection to Halifax. It's based in Atlanta, Georgia and on the surface it's strange that they've released so much Halifax music. [including Strongboy's latest album]. But I think once they got introduced to the scene here there was a lot to absorb. Halifax is quite an untapped resource with so many fantastic bands."

Taking a few pleasant turns with a goddamned rock solid throwback sound, it's the details make "Miles Away" extra delightful. Interesting touches of percussion and restrained harmonies create an overall woozy cocktail of mellow grooves. "Lyrically, it basically me just trying to capture constant repetition of my inner monologue. Mostly things about communication, solitude and ways in which I try to fill my time," says Fordham. "And of course, it's very much inspired by other songs and bands that we love."