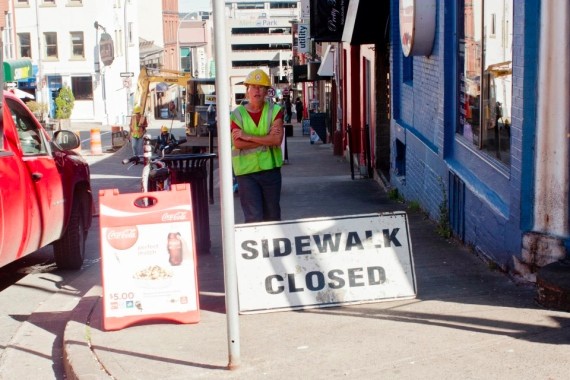 Cadence Macmichael, owner of Pretty Things Boutique (5240 Blowers Street, 492-8329), emailed recently to relate her frustrations with some construction on the street in front of her store. Her story is compelling, and echoes complaints I've been hearing from other downtown business owners.

Macmichael took a cab to work one Tuesday morning, only to find the street being worked on, as a contractor to Heritage Gas was putting a gas line into another business on the street. She claims that a construction worker gave both her and the cab driver a "hard time," even though they weren't disrupting the site of construction.

"I was given no [prior] notice that [the construction] would require shutting down both street and foot traffic and access to my business," writes Macmichael. "A sign was put up at the corner of Blowers and Grafton Streets as well as a construction worker to redirect foot traffic away from the side walk leading to my business. The workers were extremely rude to people walking and driving in the area, even going so far as to tell employees that they weren't allowed to be on the sidewalk that went into their work places, despite no actual construction being done on that specific part of the road and/or sidewalk at that specific time.

"After hearing that foot traffic was being blocked on my sidewalk, I went to investigate to find out how long this was happening and why because clearly it was going to affect my business," continues Macmichael. "After watching her turn away people (several of whom were clearly tourists) I asked the construction worker, 'Are you shutting off the foot traffic to my street? You can't do that. This affects my business if there is no foot traffic." This woman had a terrible attitude and rather than giving me information on how or why this was happening or appologizing for the inconvienience, she snapped at me 'I'm not stopping people from going to your store they can go to your store if they want to go to your store.' I had told her I had just witnessed her stopping people from coming down my street to my business; her response was to tell me that only people who needed to be on the street were allowed down because they were dealing with natural gas pipe lines and that it was an issue of safety. "

As she tells it, this exchange perplexed Macmichael. "Frustrated and confused about the situation, I asked if I could speak to their supervisor for further information, which she told me she told me there was no one on site. This set off alarm bells for me because considering that they were doing things in the name of 'safety' and that they were dealing with natural gas one would think there would be a supervisor on site."

I completely understand Macmichael's anger, but for the sake of argument, let's say she was directing it at construction workers, not managers or PR people. If that's where Macmichael left it, I might be tempted to shrug it off, but Macmichael took the extra step of trying to contact someone with some authority.

"I contacted [councillor] Dawn Sloane and asked her who I needed to talk to about this situation and she forwarded me to David Hubley [a manager in the city's transportation division] but when I called I got no answer from his office. I called a friend who was formerly involved in Halifax politics and she told me to call [city CAO] Richard Butts' office which I did and after a bit of run around I was able to get a hold of Debbie Andrews from with Halifax Designs and Construction, who was at least able to tell me that it wasn't the city doing the work but Heritage Gas and to give them a call. I called Heritage Gas twice and was told that a supervisor would be coming down to the site to talk to me and tell me what was going on."

At this point a neighbouring business owner demanded to see the permit allowing the work to be done, and, according to Macmichael, the permit was for the opposite side of the street, not the for the sidewalk that was being closed.

By then, "I had called everyone I could think of to call for information," writes Macmichael. "Then I heard rumor that the reason that they may have been there was because of a gas leak and that was the safety issue. Even more concerned now, you could say I was at a point of rage. If this was a safety issue then why not notices, why was no one from Heritage Gas calling me back? I had heard that someone from the office upstairs from mine had been given a hard time about coming down to light a cigarette because there was a potential for it to be dangerous with the gas. But how was any one supposed to know? There were no notices, there were no signs stating that there was potential for hazardous gas in our area, and there was no one from Heritage Gas giving us any answers. And STILL no supervisor on site telling us any information. So here's where I called the police...Whether or not a police officer came down to investigate I'll never know because no one came to talk to me."

At the end of her business day, having suffered a loss of sales, Macmichael says she was contacted by Pernell Walton from Heritage Gas, who "seemed apologetic," but there has been no follow-up, and no explanations for the lack of communication.

As Macmichael points out, this is a recurring theme downtown. We heard Argyle businesses make similar complaints during the impromptu parking ban one Friday evening, for example.

This isn't rocket science. Downtown businesses are an essential part of the downtown core; they shouldn't get to unilaterally call all the shots, but it's beyond reasonable that they be consulted and warned of all construction and street disruptions, and that those disruptions be worked around their business operations, as best as possible.

There evidently isn't a communications requirement in place for construction permits issued in the downtown area, or if there is, it doesn't work.

I would argue, rude construction workers aside, the fault here lies with the city, which either doesn't take such complaints seriously, or doesn't give a damn.

It needs to be addressed, pronto.